Up scaling to new space - Brainstorming

So next year I’m planning on moving out of my studio space (back bedroom) and into a new build in the garden. I’ve been looking online at the types of custom package garden studios you can purchase but they’re a lot more expensive than I thought.

I was wondering if any of you have already done this and if so, have you taken other routes in either custom designing spec outhouses and just commissioning local builders to build it etc.

I’ll end up building some sort of out house anyways so it needs to be quite insulated for sound leakage. My budget will be around £10,000 and I think the space needs to be around 6X5 meters in diameter.

My main advice would be to not be cheap on the sound insulation. I would get so mad if I heard neighbors mowing their lawn, dogs barking, and all else that goes around outside. Especially if you record your own instruments and sounds in anyway, silence is your friend. Personally I would use no windows, and the door should be one of those heavy ones for extra insulation.

2nd advice: make sure to go with a sloped ceiling for better acoustics, and I would choose a less square shape for the room too.

Yeah I’m not going to stinge on anything… I think ten thousand British pounds should be more than adequate for such a venture but the online sources which are notable are way more than that… so I’m exploring other options.

Thankfully I have an inheritance coming in 2020 which will facilitate this move which I’m so grateful of as it will ultimately mean I get to continue with my studio at home while also starting a family, which we are currently putting off

I would love if you documented the process, or in some way shared updates in here. Including pictures, and money spent and on what. Would be super valuable for other composers like myself to learn by a practical example how this can be done;

Btw, I would go for double wall approach personally. Meaning after the shed is built, add an extra wall inside it with those big wood boards, and an extra air gap from the real wall. Or perhaps even brick it from the inside, bricks have great sound absorption. Altough expensive I believe. But I love the look of dark/almost black brick walls.

Yes I’ll definitely go for a double wall and a floating floor system. Luckily I work in a college in the day that has a construction department. So I’ve been working on a few plans that include a double wall design. An inner breezblock design with an air caveat for extra acoustic dampening, followed by a standardised brick outer layer. The roof will be a standard apex filled with rock wool, and the inner walls will have a 2.5 inch rock wool layer topped off with acoustic paneling. The floating floor will be a similar design with air pockets and sponge inlays to absorb both noise and tension between seasons.

I haven’t priced up yet and the electrics won’t be inflated into the wall via a cavity. This is to maximise the sound absorption and also give extra flexibility on the need for new sockets and lighting. The only access to the building will be via two double glazed Patel doors that run adjacent to each other with a 10mm gap between them, matching the wall cavity. All of this should give -40db of reduction on average for every 100db of noise.

Not sure wether to have two rooms or just one at the moment. Though, after I have completed the build I will use the rest of my budget on acoustic panelling, outboard hardware and a new desk.

Brick and breeze lock are very good for sound absorption because they have air cavities within them and they are flexible enough to move and redirect lower frequencies through the wall. Most houses in the UK are brick which means most home studios struggle with upper mids rather than bass. Other wooden designs are actually exactly the opposite of that, this is also one of the reasons why studios have brick walls and a solid wood floor. Both surfaces counteract each other’s problems… them the one things that are issues are reverb and standing waves between the floor and ceiling.

Those are very minor issues in comparison and are easily fixed with both acoustic panelling, Standing bass traps 0.5m away from the corners of your room and floating clouds over the reflection points and points where the standing waves are strongest.

Ah I forgot you are in the UK. Sweden is like one gigantic forrest, so almost every house is wood here. But man, this sounds way more ambitious than I first imaged, you will be in happyland when this gets done!

Honestly, the best way would be an underground Hobbit studio lol.

a hobbit studio would be amazing! I’d have a cheese cellar and everything!

Yep, the Uk is very different as our climate is wet and humid… I know Sweden can be a little wet but it’s definitely not a humid environment aha. I watched a documentary on the BBC last year that talked about why we prefer brick housing. They used Snow as the main reason and compared European snow to British snow. Apparently our climate creates wet snow which is colder and damper, where European snow is very dry in comparison and causes less problems as it actually keeps the ground warmer as it’s a better insulator. Was really interesting. They also spoke on other topics but that’s what I took away from it.

Yeah I’m definitely going all out with it. Way back when, I studied music tech in college which taught us the rudiments of acoustics and sound insulation so I have a good idea of that stuff. I’ll be learning a lot of the construction stuff on the job so I’ll probably do a lot of the work and pay someone to assist me who works in the industry, which will ensure I’m doing things right, thankfully some work coleg yes have given me all of the uk regulations and that’s really helped to start to piece the plan together.

I think if I were to make it out of wood alone, I would ultimately run into problems around ten years down the line. Though going down this route I’ll need to get minor planning permission slips. If it was wood I wouldn’t need any permission as long as it was under 2.7m tall as it would be classed as a non fixed building unit.

In Sweden building permits for this extra buildings used to be hard to get, but then they came up with a new standard type of building that practically does not need permit as long as it in within those fixed dimensions they set. The biggest problem is it needs to be 4,5m at least from your neighbors land, as well as public land (road etc.). So you need a big property to have room for it.

Ah yes we used to havdd Edd the same thing. Think it was a minimum of 2m away from any boarder but now it’s changed to make it simple. Which I’m very happy with. For us I think that changed in 2015 ish???

When are you getting started with this build, still just a dream, or is there a plan?

So it’s a little past the daydream. I’ve been making notes and drawing the Mock plans over the past Week. It will be a while before those are finished. I’ll be making sure everything is perfect before I start,

The plan this far is to start construction in April 2021, so around a year and a half away. This will also give me time to sort out other things such as rearranged deadlines and other earnings for those few weeks of transition.

I’m realising everything that needs to be taken into consideration with a build when you have two earnings that are competing with your time, along with logistics and fitting in the plans for when things go wrong too.

Plus we have just got a puppy so I want her fully trained before the project goes under way. The last thing I want is for her to get hurt. Here’s a pic of her in my studio, she’s a very well behaved puppy! 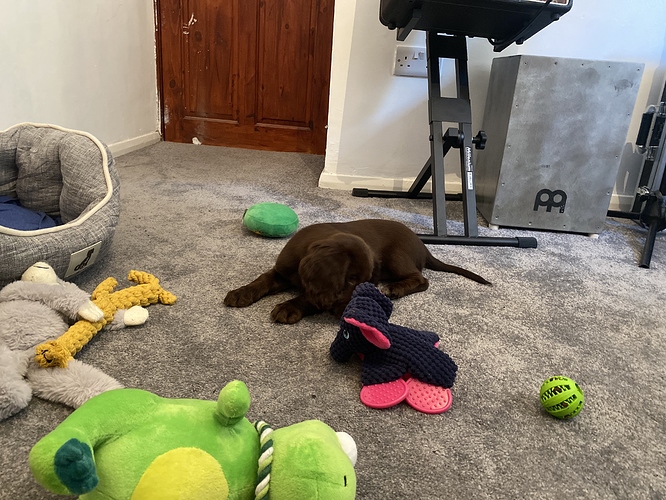 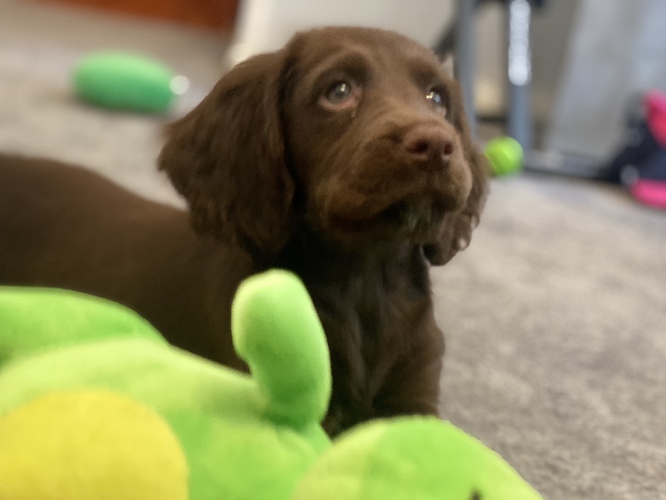