I must say that, firstly, I decided not to enter the contest because I needed to spend my time in another
compositions. But, there was an idea about this cover shouting inside me and I had to explore it.
I don’t know why since the first time I heard about this cover, even when we were voting to choose the
soundtrack, a doubt came to me. “how would it sound if…”
And I had to try it. So I burnt my “confort zone” and commit this crime.

Track Description : It contains many musical phrases from the original, with a really different approach.

My Creative Vision : What if a progressive rock band plays this cover. From the beggining I had Emerson, Lake & Palmer on my mind. I don’t understand why because it’s been ages since I don’t listen to their music but…I thought well, it is an energetic song (we are talking about living dinosaurs), and it has many variated fragments, some classical harmonies, some epic explosions, so maybe progressive rock could fit.

Composition Overview : It starts with a soft presentation of one of the more memorable phrases of the
original but with a changed flavour, driving to “the horns four impacting notes” (but not played with
horns). From there on the band enters shooting a “progression” (you know) of different parts, and
bringing many well known phrases. Some chord cadences are slightly changed to become more rocky.
Sometimes it goes a mess, Don’t panic, it is normal (strange substances in the times of the progressive
rock…)

Main Sounds : It is a rock band, dude. Bass, Rhodes and Hammond keyboards, Two acoustic guitars for some classical passages, Drums of course, and electric guitars, one with a wah effect, other with a little distortion, an one more to play strumming.

Very interesting piece. Quite liked the harmony in this, very prog!! I think that it works well but not all the counterpoint and extensions are appropriate. With a little more work this could be even better. There may need to be a bit more work done on the mix but I love the concept. Well done!!

Thanks geoff. I needed to take this music out of my brain. So i stopped pulishing. That dirty imperfect mood doesn,t goes so bad.

I really enjoyed it and you are right, sometimes you just need to clear out your ideas

That was really cool Vicente! Of course with that Hammond in there, I can’t help thinking, “Green Onions” by Booker T and the M.G.s. Very 1960’s sound! With all these unique and interesting covers, I almost feel a bit stupid for just doing a traditional orchestral version

Great work! Keep it up!

Thanks Matt. It is not my style but I just let myself go. I feel that in covers any style can work, the point is not to perform the same song, and add your development of the same roots.

Nice presentation All the instruments are very interesting especially Guitars

You are not crazy. Excellent work.
The hammond organ also brought back memories of bands like Procul Harem.
Well Done

Thanks Bala. I think it is a challenging recall for me, and I’m glad with the final product. As always with more time dedicated…but i think the journey researching the original and creating something coherent has been a huge funny and learning process.
You are very kind

Thank you Keith. I liked using those instruments so in the future i will keep on using then in more projects.
I’m really dying for hearing everybody’s covers. I supose the voting will star on july 1st…pffffffff.

I can hear this in the end credit scene, nice way of blending all the influences and giving it a modern twist.

I thank your words, Carl. It has been a risky idea, but i had a great time.

Vincete - cool concept. Well done and I enjoyed listening to it. I decided to listen and write these notes before reading the previous comments. so apologies if there are redundancies.

Intro level may be too soft. Love the energy with the drums and the 70s instrumentation. Would be amazing if this could have been done with a real band and drummer (if time and budget allowed

) , but you did a good job with the mockup. What VI organ did you use?

Hey Brandon. Thank you very much for your kind words.
About the organs, in this case, they are not external VI. Their origens are presets for instruments included in my DAW (Reason), slightly altered to my own taste.
The Rhodes sound comes from an instrument called Radical Keys, that includes organs and electric pianos.

The Hammond M100 sound comes from a Combinator assembly. Combinator is a tool inside Reason that lets you combine different instruments, effects, mixers and any other tool, inside only one machine. Then you can save and reload it as a single patch. This organ is created spliting the keyboard, and using one organ for the low notes played by a sampler called NN-XT and its particular distortion effect Scream 4, and the same for the high notes. 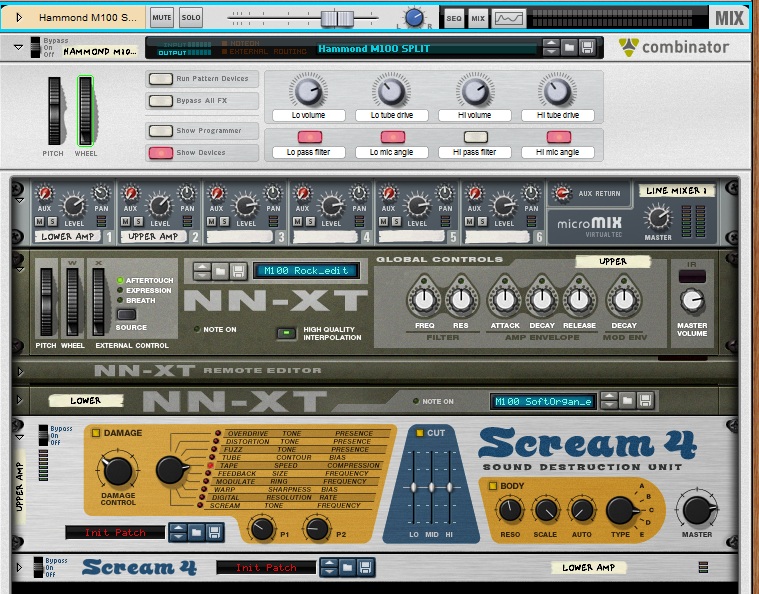 A real band would bring the real vibe.

Thanks for the info!