Is it ok to break the rules of harmony and voice leading?

Here is the progression as I wrote (twice through):

After doing some reading on parallel fifths and octaves, I posted elsewhere asking for advice and was told that I was not conforming to traditional voice leading and that I was chord planing – I changed the progression to conform with those rules - here is the revised version (twice through):

However, to my ears, my original version sounds much better, despite breaking the “rules”

I would love to hear your thoughts and comments

Thank you and be well

I believe even the most strict and theory oriented composers break the rules every once in a while.

It’s more useful to think of the rules as guidelines for what will typically work, and a tool for more easily understanding why something doesn’t work, and what you might do about it. Filtering infinite possibilities and endless trial-and-error down to a bunch of options that will likely get you where you want most of the time.

More specifically, you need to focus on what you actually want to achieve, and use the rules (if you need) to find solutions for that. The rules (unless you go way beyond basic harmony and voice leading) only give you the most “bland” solution possible - which is great if you just want to harmonize a motif without stepping all over it, but not so helpful if you want a very specific effect.

So in short, break the rules where it’s motivated. Apply the rules to everything else, to keep it from interfering.

David - thank you for your comments. IMHO, the falling feel comes from the fact that all notes on each string section continue downward (except for one note that stays on an E for 2 bars in the viola section).

For modern harmony, break the rules…if it makes sense and you know why you do it. Really, parallel 5ths/octaves are OK if you only do one or two in a row, but it starts to sound a bit weird if you string a bunch together in succession–unless that is a desired effect. (heavy metal power chords are all parallel 5ths/octaves!) If you’re trying to write a traditional sounding classical piece, then yeah, avoid parallel movement like the plague.

I never set out to write in a particular style - I am quite new to orchestral instruments (coming from a rock/pop background) and I write and assign instruments based purely on what I think sounds good to me.

When I wrote that chord progression, I mixed and matched different notes of the chords (other than the celli/basses) until it sounded like I heard it in my head - which, apparently, broke the “rules”

I’m not formally trained, but I pay attention to people who are and aren’t; my take on the average answer is that the composers ear is the rule.
Both progs sound very good to me, but it’s your creation.

Not having any formal training, I can’t say I fully understand what you said. However, neither one was bad. Each conveyed a different feel; a different mood. So, I would have to say that it is only wrong if it conveys an idea that is different from what you intended.

Does anything look awkward?

Hey Douglas! The question is, what do you want artistically? You certainly can do what you want, but if you’re looking to make things sound “good,” “smooth,” “authentic,” then I’d say yes there is some awkwardness in the way you wrote the first progression.

The first thing, especially when writing for strings, is to have your upper voices closer together and the bass voices spread wider and to write your chord intervals following the harmonic overtone series; that would be: root–root(8va)–5th–3rd. You don’t *have * to write it that way though, that’s just the standard. So for the first DMaj7 chord for example, the bass/cello in octaves with the root is good and the C# in violins I is good. I personally would raise the F# an octave and place it in the violins II. Then play a 5th double stop in the viola: D–A. So the chord would be voiced, D–D(8va)–D–A–F#–C#. Again, just ONE way you could do it.

Second, as you mentioned, the voice leading, which is what will make the progression sound more seamless and smooth is all going the same direction which is normally not what you want to do, because you get the parallel octaves/5ths and it makes the sound very sharp and jarring. Usually what you want is to move some of the voices in the opposite direction or maintain the same voice on the same note if it is used from chord to chord.

From an auditory standpoint, your outer voices are going to be the most noticeable, so you want to make sure those have the least, if any parallel movement. Using chord inversions is the main way to do this and that’s why you have the voice-leading “rules.” Also, you don’t always have to use every note in a chord to get that chord’s sound; mainly, you can leave out the 5th and you still get the chord’s sound. 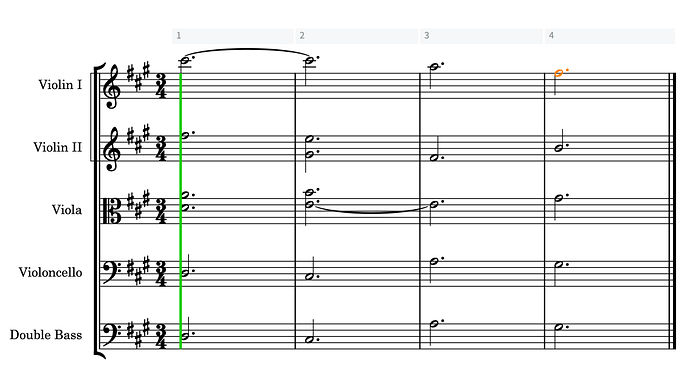 Hey Douglas, if you liked your original version go with it! Like I said, my suggested voice leading was only one potential way of doing it based off traditional voice leading practices. You could take your prog and make any number of versions until you found one you liked best—and if that happens to be the first one you did, cool!

If you liked the sound is what matters most, but the best way of going about that in my opinion is to make sure you know why you like it that way and and what the theory is behind it! Hope you post the rest of the piece once it’s done!

EDIT: I should note that I noticed in measure 3, it sounds like you put an F natural instead of F# for the second violin. If that was your intention, my mistake because it wouldn’t sound right–it would create a minor 2nd. it should sound like this with the F sharp:

EDIT: I checked and V2 are both F# in the 3rd measure

It’s all good. Did you perhaps use G-clef instead of the Alto clef for the viola? I just hear a minor second interval in there which isn’t there in either your version or mine

I have rewritten it and here is the MIDI – please feel free to critique where you see errors (are the voices too far apart from one another? not far enough?)

I was just watching the voice leading chapter of @Mikael Udemy course on writing for strings and was hoping that my updated version is more in line with what he is teaching but, I am always open to learn 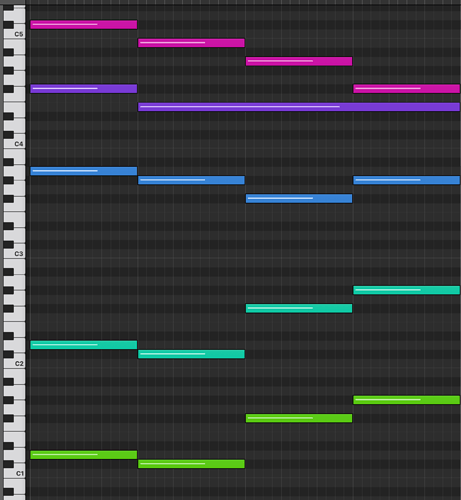 As always, I appreciate the helpful community here

Looks fine for me. But hearing the music is better.

Please bear in mind this is unfinished - it is not mixed, compressed or EQ’d and all I did is add some reverb (ok, now that that is out of the way lol):