After spending some time with relaxing music and completely skipping the dinos, It’s time to release something for the action music contest.

As I was still working this with my old computer, I tried to approach this a bit not-so-heavy-on-plugins mentality. Just picked up my guitar and started to jam. From the first riff, I already got the feeling of a chase scene but not too dramatic due to the groovy feeling of it. I actually imagined the whole scene in my head while composing this. Too bad I can’t animate, so you need to settle on photoshopped picture of my imagination.

Composing wise this was pretty painless as I managed to write down enough rhythm parts in the beginning. Of course, as usual, this still took bunch of time as I wanted to test all kinds of stupid stuff. I’m also happy that I finally managed to utilize my 7 stringer in composition even though I suck at playing. 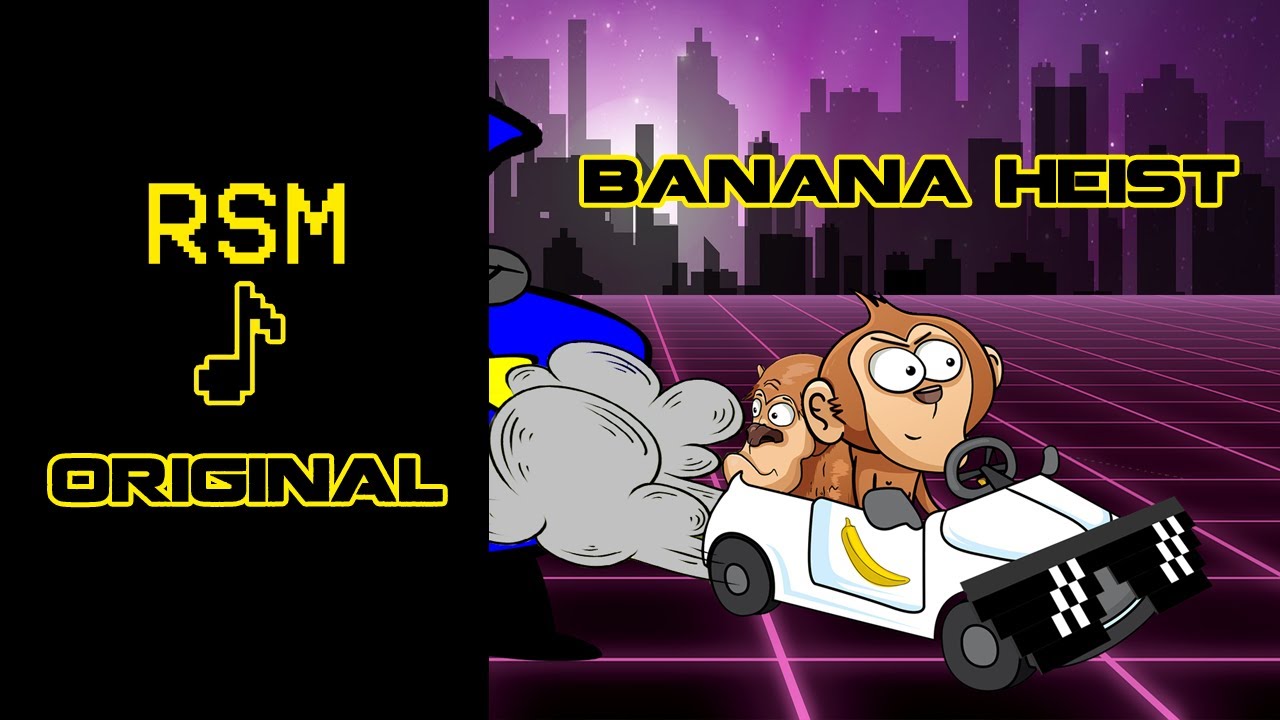 Love it! “Banana Heist” What a great title. Definitely has an action vibe and sounds like you had a lot of fun playing this, and I had a blast listening to it! I’m a metal guitarist myself so I have to say your tones/riffs/leads were very well done and all fit together nicely. I’d love to write some fun metal instrumental stuff like this, but I’m so classically minded it’d probably sound terrible. Great job!

I thought the guitar was great love the hammering pulloffs too. In my mind I imagine them being pulled over for having the guitar too loud (not that it was) " Would you please turn that down sir" " What" says the driver as the Dial goes up a couple of clicks, “sir!” (Dial turns to 11) lol

Really fun track, well put together, for me it hits the spot, neatly done, "ok people… move along nothing to see here!"

This was most a-peel-ing! Thanks a bunch for posting.
But seriously, what a fun and clever piece!
I enjoyed it muchly and played it twice for good measure.
Favourite part: that little toned down synth section in the middle before the guitar comes licking back in!
Well done!
Adrian.

Sorry for being late with the replies. Took some time off from the real and virtual world and spent some time with my family at summer cottage before my vacation ends.

@Bala
Thanks! I’m starting to get the guitar tones out finally as I’d would like them to be. This was the first time I was using ML Sound Labs - Super Duper (wacky name, yeah) amp sim with rhythm guitars. I was really impressed how mix ready their amp and presets were. Also very lightweight on cpu (and price) compared to Neural DSP stuff.

@MaestroX
Glad that you got the right kind of feelings out of the song! Classically minded? Would like to hear more about that? Are you too tied to theory or classical guitar playing or?

@romeosapien
Thanks for the feedback! I usually let one my friends to listen the tracks before I release them. We have a pretty similar taste when comes to music. He actually didn’t like that part particularly. So I was pretty close to remove or alter it in the end. Glad that I didn’t.

@ComposerEverett
Thanks for the kind words, much appreciated!

Yes, I grew up being very classically influenced, so when I write my metal band guitar stuff, it always has a darker, neo-classical vibe to it. Same with writing orchestral stuff; I try to write some modern film score type of music, but there are bits that always end up sounding very Beethoven/19th century.

Funny piece. Direct and flaming. For me, it is a completed song, it doesn’t need to be related with an action scene to have sense. However, its energy is good for a driving game for exmple. Well mixed. Good job