Which is your favorite Harp library?

I have been considering CineHarp from Cinesamples, because I feel I lack a cinematic sounding harp. Which harp library is your favorite and why? 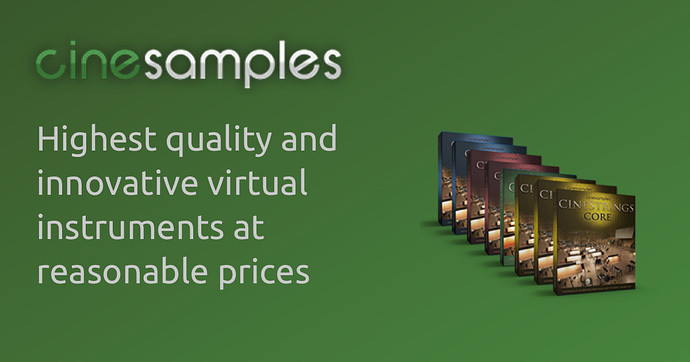 CineHarps is a collection of deeply sampled orchestral harps that's easy to use and is loaded with techniques and features that will make this a classic in any composer’s template. Recorded with wide variety of perspectives at the legendary MGM...

Cineharp every day of the week. The sound and the runs are fantastic.

Hey Fredrik, do you have any other ones to compare with?

Right now I have Elysium Harp by Soundiron, and the Harp in Pianoteq. Plus a few in orchestral collections.

I just use the solo concert harp from Berlin Inspire by Orchestral Tools. Sounds great to me, but maybe not real versatile. Good thing is you can get the OT stuff a la carte through their SINE player, so instead of spending 200 $€ £ you get it for €28 and that makes my wallet happy so I can dish out exorbitant sums on Cinematic Studios Woodwinds and all

I may get the new Hollywood Orchestra bundle when it gets released. Opus I think it will be called, have you seen the news on it?

Virharmonic has a great sound, but from what I’ve seen not as flexible as others, correct?

Yes maybe. But instead you can get a good result fast without tweaking. The only thing I really lack is dynamics via mod wheel. Hopefully this coming update which is free for existing owners contains more.

I have many solo strings and I rate virharmonic very high for very expressive stuff.

My contribution to your string contest this month will actually only include strings and everyone is from Cinesamples. Ensemble and solo. So there you can get one comparison. If you excuse me drifting away from this harp subject.

I actually have 4 different harps now… it’s odd to think that only a few months ago I had 1 harp that I thought wasn’t great, but wasn’t bad either lol.

So I have the Hollywood harp which as Fred said, is good… probably not the best overall but actually it does something the others don’t do… you actually want a clean sounding harp without artefacts. Usually I want as many of these squeaks and player sounds as possible as they add a ton of realism, but not in this case. You see, often we want to depict what the listener would hear sitting in a hall listening to the player. So this is why we use so many different mics. Blending them together to get the perfect mix between distance and clarity.

In the case of the harp, there are a lot of noises that the harp creates that aren’t associated with the sound. Inner mechanics of the pedals, squeaks from the tuning pegs which happens a lot in playing them, creaks from the wood as the frame is hollow, the performer sounds. It all gets in the way… plus then you have the main issue, finger noise and string buzz. You don’t want to hear them pluck the instrument too loudly and you don’t want to hear them mute. You want a clean note with a smooth tail, which is exactly what someone in the audience would hear and ascociate with the harp.

EW Hollywood harp does that incredibly well, and I’m very new to the EW family so there’s not a lot I use from the sample pool because a lot of it is outdated. Still super useful to have though, especially for blending. This would be my go to.

Then I have the BBCSO Core harp. Very good harp, it’s too loud out of the box so it needs gainstaging and you hear art of acts every so often. This means I’d mainly use it either soley with BBCSO because it works well in that context, and the hall hides those sounds… or I’d use it in a quarter of chamber size ensemble.

The third has the same issues, which is the Berlin Harp. Awesome sound but limited use id say.

The last one which I started with was the free harp in kontakt. I know what your thinking, probably not great… you’d be right, and wrong. It needs a little EQ but they’re real samples, they are clean and other than being a bit lacking in dynamics it’s a solid harp for many applications. Used it in a fair few projects and clients didn’t even know. It does what EW does well though so other than a bit of tone shaping it’s good.

Come harp isn’t one I’ve tried but it’s very detailed sounding so if you are going to realism in the sense that you want the harp to sit well, you’ll have to do a little work… not much but a little. But this is just speculation.

I have to say though,after the latest BBCSO update, the mallets are so worth getting. The whole thing is to be honest. It’s a good investment to make. I’m using it quite a lot now. There’s one or two things that aren’t good but I’d have to say that the brass really sounds much better after the recent update. It’s now very usable. Still a few tweaks needed but it will definitely get there… I mean they are working with so many samples so I’m guessing that BBCSO is an investment of time, not only in writing but in updates and trust in the company. Onecthing SF are great at.

Funny I have used the Kontakt harp too before. I think there some instruments kontakt that’s quite good actually.

You are right about the close artifacts sounds. Check here in this video @Mikael Anne talks about harps near the 14 : 30 marker

Yeah contact fo have one or two good patches s. The percussion are ok too, and I’d check out the choir patches.

@Mikael I heard an example of Spitfire Harp Swam recently and liked it. It might not be what you are looking for but could be worth checking out.

its very expensive!, nit every composer have the money to spend on a librarie so good!!.
just make a point​:grinning:

If we are talking about the VSL harp that was bundled with Kontakt, that is an extremely useful harp. I use the VSL one also - when you place it with IR’s it’s great, and I use CTP or GeoShred to play in harp flourishes with whatever scale I choose - sometimes scales a harp can’t do

- and haven’t used a prebaked one in ages. Most of the available harps are marketed based on the sound of the space they are in - but for me the Altiverb Fox stage is so usable and great that I prefer a drier, direct harp.