Thanks for the suggestion! I’ll check them out!

No problem, I think gear 4 music are doing their own version too which is cheaper too!

Yep. Looks like they have some nice ones too. They also sell the Glorious desks slightly cheaper. Thanks!

Hi friends!
Certainly an important topic!
I have had a problem now and then with my lower back. For me it it really great to have a table where I can change the height. I also have a chair with that possibility. It means that when I work for a long time I can always change how I sit. Sometimes I almost stand up! I recommend to get this kind of table for you all (before your back get hurt by sitting still for sometimes hours.) They actually have this kind of table even at IKEA!
Jan in Stockhom

I would actually love to have an electric standing desk, but since I have my speakers on stands beside the desk it would not work. I would need to have the speakers on the desk so they rise and lower together with everything else. And all my gear on the studio desk would be over the weight limit of the IKEA standing desk, so I would need something more industrial. I know there are solutions, so perhaps I will get one of them later. My back is often hurting so it would be worth it.

maybe one day on a future upgrade 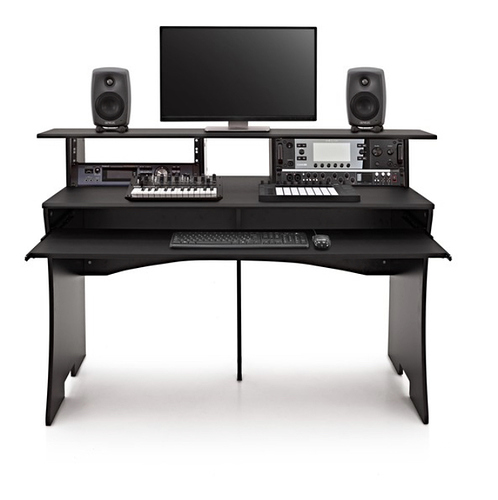 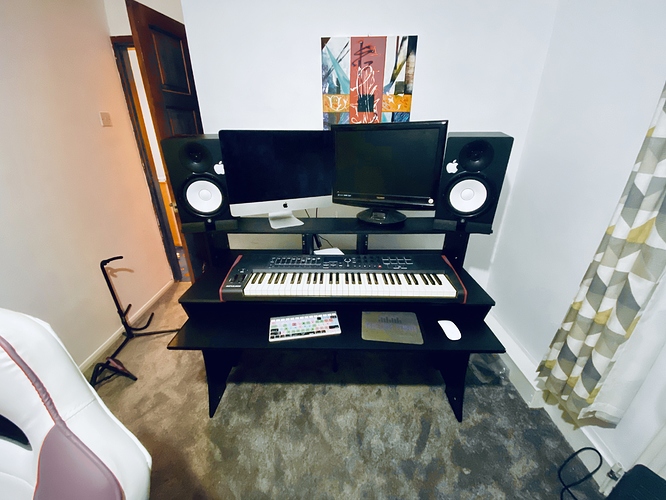 Overall I’d say it was a decent step up for the price.

Looks pretty good Geoff, but man those naked walls could use some acoustic panels.

The panels are on the other side Mikael.

they’re currently just in the first reflection points and that painting has rock wool inside it.

I’ve been getting on a month as the panels I’ve got are quite big due to the room being slightly bigger. Right now I don’t have any issues in my listening position but when I move backwards there’s a room resonance of 400hz about a foot behind me. It’s only small but I’m aware it’s there. So I have no issues really. I do however need another 3 panels which should take me around 3 months to get. Exciting times!

Ooh and I’ve also got 3 layers of insulation under the carpet which is hidden but really really helps!

I guess I personally need WAY more reflection killers than most people, as I record videos and want a super dry sound (as dry as I can get).

Panels on the other side can be a perfectly valid solution.

My back wall is the only treated area, and all I really need to add for that last touch is a ceiling cloud or something, as there’s still a reflection zone there. The effect of the “reflection free zone” design (faceted front wall with flush-mount speakers) is that all first reflections from that wall are directed away from the listener, which makes the room sound much bigger and more balanced. The absorption is mostly for shortening the reverb tail as needed - and by pro studio standards, what you need there would depend on use case. (Music, film etc.)

That said, this applies mostly to sound coming from the speakers! The reflection free zone does improve overall acoustics, but not in a consistent and reliable manner. Besides, unless you have a large enough room, and want to record the room sound, you’ll want a much drier space for recording anyway.

Tbh my room really is quite dead until the DB passes 90. Though I never mix that loud for obvious reasons. I’ll get around to doing the other walls as I go but the desk has been the priority for the time being. Every so many months I upgrade something with the pennies I’ve made aha.

Is your resonance right over your mixing area?? If so that’s so unlucky. As you can see in the picture, there’s a small walkway out into the rest of the house in my room which has pushed the standing wave further back in the room. It’s really concise isn’t for now as it means I’ve got no issues as the two first reflection points and one hidden panel behind the picture deadens those lower reverb tails a lot.

Just to add aswell, I’m quite fortunate that the resonance of the room is actually quite pleasant, so I have no issues with recording artists or bands because it’s aesthetically sound.

Nope, the only issue is the ceiling reflection at the point in between the speakers and the listening spot. (Same issue one has with the side walls in a normal listening room.) But, it’s pretty subtle, which is why I haven’t bothered taking care of it yet.

There is of course also a floor/ceiling resonance, but that’s only noticeable when recording. Somehow, sound from the speakers don’t seem to trigger that to any significant extent, and I can’t see any obvious traces of it in the calibration.

So, a ceiling cloud that extends over the listening/recording area should take care of both of those issues.

Calibration corrections (20 Hz - 20kHz) peak at around 6 dB - and surprisingly, that’s not in the low end, but around 250 Hz, and is caused by open cavities in the wall after I added a display between the speakers. Should fix that one of these days, though, as although the calibration flattens the frequency response, the stereo image is more diffuse when the speakers aren’t truly flush-mount.

Anyway, I suspect the unusually flat bass response is due to the front wall acting as a wide band resonator bass trap, since it’s open near the ceiling. (I did the maths; the resonance should be in the right range for that.) There are still some subtle bass resonances, but it’s already on the level that the speakers are more reliable than headphones for mixing bass. Might have a go at building some tuned resonators of some sort to take care of that last bit, but for what I’m doing, that’s more of a science project in search for overkill levels of perfection.

It does sound like your in a similar position to me, though I’m in a better position for recording. I love the sound of how you’ve got around some of your issues! We are in a brick house and the speakers are 1 ft away from the wall so I’ve had no issues.plus that wall in the pick is thin and all the low end passes right through to the bathroom so that helps. There’s no using the loo when I’m recording though

Ultimately, I think we all have to take into consideration that it’s a home set up. There’s pros and cons to it no matter what you do.

Yeah, even with an unlimited budget, achieving perfect sound is a tall order - if there even is such a thing. Physics, of course, but also because you need to fit displays, keyboards, consoles and whatnot within reach as well, which all interfere with the sound to some extent. (I lost count of how many days I spent moving screens and speakers around and measuring the effects, to come up with my current placement…)

Either way, the primary objective here is really just to minimize the risk of missing issues that may be exaggerated to problematic levels by some listener’s sound system. A perfectly flat system with no resonances brings the “correct” sound closer to “if it sounds good, it is good” - but you still need to train your ears on it.

Acoustics is so hard to get right! When I recorded vocals in the past I was so annoyed that I heard some type of “ringing” resonant high frequency in the room, and I could not figure out what it was. It turned out to be the metal plate of the music sheet stand!

Then we have all these “gadgets” that can resonate. And lots of big hard surfaces like a huge desk, big flat computer screens…

Yeah… I had a fun incident like that! There was a huge notch at 240 Hz or something on one speaker (60 dB or so!), and I started wondering if something was blown, until I realized that there was a small shelf that acted as a resonator and totally absorbed that frequency.

And now I have a violin and a cello in there as well - now with carbon fiber updates, for extra resonance! That will surely not cause any problems.