I’ll be honest, the first Mac I have bought because of Logic.

I remember clearly why I did that, although it was more expensive. Because of the beautiful and logical interface of Logic and Mac. I remember too, how Cubase turned me totally off, I couldn’t figure anything out without going back and forth the manual. Hated that. Never had anything like that with Logic. That was the only reason.

Only later I have found out, that it was the best decision due to updates and upgrades. At least, the older MacBooks were still upgradable. Today, Apple only does it with Mac Pro. iMac will be the same as the MacBooks. I don’t like it, no one does, but Apple clearly tells us why. You want to be “Pro”, go for the Mac Pro and custom it the way you want, and most importantly … it will work.

Windows computers? I feel like I need to search if an Acer, Asus, or whatever is there will work with my interface, the plugins, the software, etc. It’s just my feeling, as of course, I have colleagues who are “pro Windows” and hate Macs, but always tell stories about what doesn’t work.

There are studios, professional studios who went back to Windows, and it works for them, because they work with professionals who know what components to buy in order to make a powerful machine for less money that will work for ages IF no updates or upgrades are being made. That’s what the companies tell: “Don’t upgrade without asking US if that was already checked before.”

It’s an old discussion that will never end, and I don’t want to share something I don’t understand or know about. I just share my experience that’s it. I am not for or against Windows, nor Apple. I want to use stuff that “just works” without headaches. I’ve chosen Apple. If someone else has a Windows and it’s working superb, so isn’t it great? That is, so enjoy it!

Besides Apple marketing tricks, they HAD to do something right in order to have that success. If something went wrong, bad machines, people would have stopped using them – obviously. And now we are witnessing a new era of personal computers – talking about the new M1-Chip. I am pretty sure, that this will be a huge financial success for Apple in the next years to come, as there is no one right now, who is performing like them. I’ve checked out some reviews, long-tests, etc. and it’s totally mindblowing. Apple didn’t play that stupid move, like “we are better, so pay more”. Instead, they’ve reduced the prices, as Intel chips were as we saw “quite an expensive thing”.

At the very moment, there is no competition at all. The M1 for music is of course not ready yet, but in the next years, with the next upgrades, it will be an amazing computer to have, again money-value-wise.

The only thing that is quite dangerous is that Apple becomes too powerful. And it’s not good for all of us. To evolve we need to have competition. And if there is no competition, people and technology stop evolving and moving on, as we saw with the iPhones. Apple didn’t do anything “new” in the last couple of years, only to realize that other brands have now better technology as they do with their iPhones that have new chips that save 0,1 seconds of our lives to open an app. They just ran out of “innovation” on their iPhones. So at least now, we see what other companies are capable of!

If you don’t have much experience with components and operating systems, have too much money to spend and/or need to use logic, get a Mac. The apple ecosystem is closed so it’s kind of dumbed down for smoother user experience, anything difficult to understand is either hidden or something you can’t modify, so if you need to do some in depth adjustments, you might not be able to do that. I like to be able to fiddle with stuff under the hood so I use windows pc’s and android phones instead of apple.

I’ve used windows computers since the 90’s and I’ve never had any major problems with any components so either I’m the luckiest guy in the world or it’s a bit exaggerated to say that with windows pc’s you run into hardware problems and with macs you don’t. Personally I can’t justify the price to get a mac, double the price for the same components coming from the same factories, also the software selection is more limited for macs, most major software packs are for both operating systems, but not all, so since I also make other things with a computer, I would need to find alternative software to replace the ones that aren’t available.

Windows 10 is the best windows version I have ever used, it’s fast and I rarely have any problems with it, if I do, it’s usually my own fault. Viruses are also not an issue, windows’ own virus scanner works just fine. The last time I’ve had a virus is probably something like 15 years ago when I still used some pirated software. I don’t know how it is today since I haven’t used macs for a few years, but earlier macintosh computers became junk faster, old windows pc’s still worked just fine but old macs were barely usable. I hear M1 is a great processor, but keep in mind that many audio software companies still say you shouldn’t upgrade since their software is still not compatible.

Mostly I think the choice between windows pc and a mac is about you, what kind of user experience you appreciate, how you like to work, what software you need, do you want to do also something else with the computer and so on. For music production both are good in the end.

I have more or less the same experience as you. Never had any problem what so ever. I raised the question of pure interest. I believe it’s always good to explore and dig. I’m starting to investigate these matters cause I’m thinking of building one the next time in the future. It will most definitely be pc. But I think it will be a while cause my currently run like a clock.

Have a look at this Fredrik!
It’s crazy, up to 64 cores. I’ll wait until komplett.se has configured some workstations, but the cpu will be released in March. 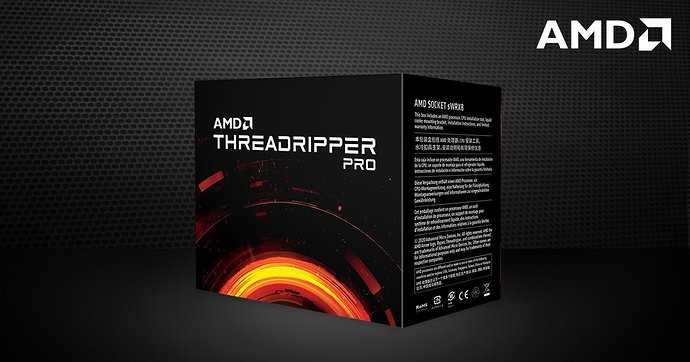 AMD has announced that they are bringing the Ryzen Threadripper Pro CPUs and WRX80 finally to the consumer segment in March 2021.

Ah. Thank you so much for the link. I’ll dive into it this evening.