Neova Expression Ring - What do we think?

So I remember following this product as a Kickstarter project a few years ago, and now it’s finally here as a finished product. Wireless with minimal latency makes me interested. What about you, any thoughts my fellow composers? 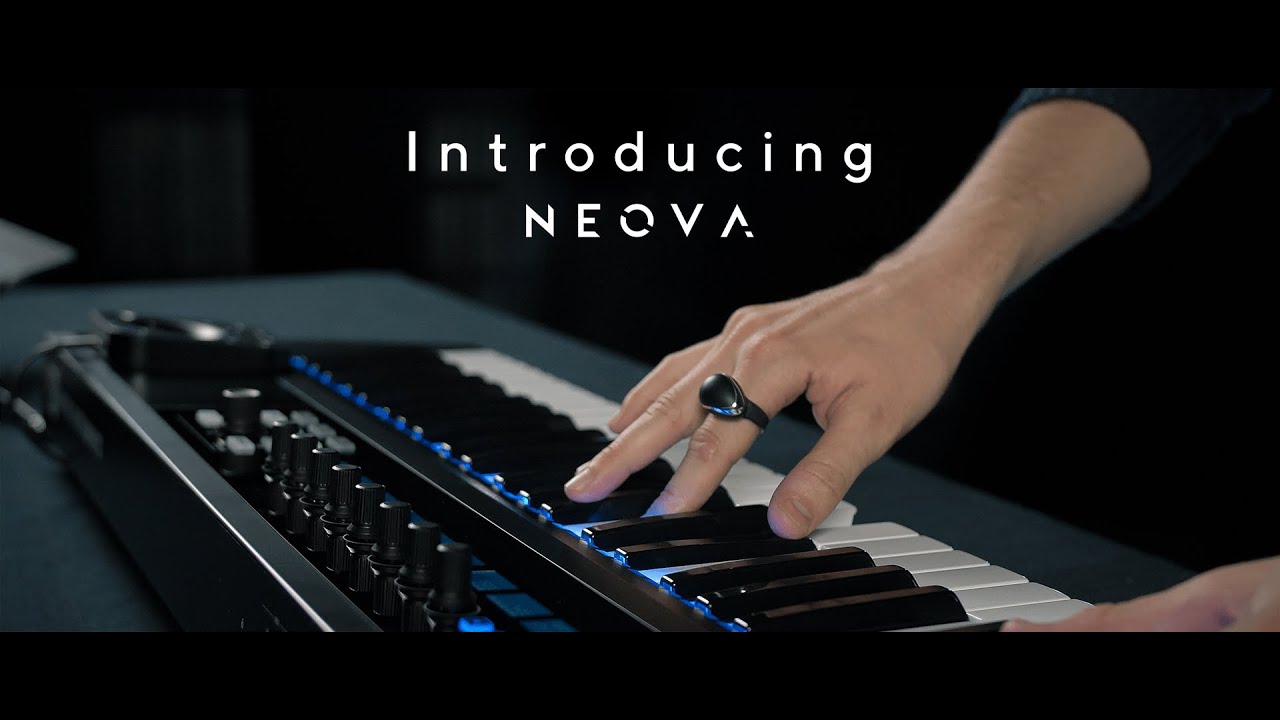 The only usable results I’ve had for true vibrato so far is with accelerometer tech (BBC2 nod/tilt sensors), and while that works great for brass, I’ve had less satisfying results with violin and the like.

(And the SWAM strings really need this! The integrated LFO vibrato basically ruins everything whenever it shines through, and it’s difficult to avoid that by just modulating the depth and rate.)

I’ve tried using the Leap Motion for true vibrato, but had pretty terrible results. Should be great in theory, as it has that natural cross-over between intonation/slide/vibrato that you have on fretless strings, but it just comes out wobbly and random. Not quite sure if it’s a tech or physics issue, but I instantly had much better results just grabbing the BBC2 and shaking it in various ways.

I think “shaking” your finger is a much more natural way of doing vibrato, since it is basically what you do on both bowed strings and plucked strings instruments.

I have to say I also really like that this product is wireless. For some reason my breath controller cable is always in the way and annoys me lol.

Right. Considering recent developments, I’m apparently going all in with music (or I’m just going properly insane - not sure sometimes), so I figured it would be in place to order one of these. Will report back!

Recent developments, in what exactly?

But I am glad you decided to give this product a shot, and am looking forward to learn your opinions after testing it in practice. Especially since you, like most of us in this forum, will focus on controlling sample libraries and modeled instruments rather than synths.

Well, in short, I seem to have moved from purchases to investments on the bowed strings side, and perhaps more directly related to expressive controllers, career opportunities are being discussed. We’ll see… All I know is, I’ll never stop playing bowed strings, but I will stop hacking drivers and network code for a living.

Indeed! Synths are cool and all, but the true reference should be acoustic instruments, or maybe ultimately, the human voice, as that’s (so far) where we find the highest level of musical expression.

Once we’ve evened that out a bit, we can look at creating brand new “real” instruments in the virtual domain - but given that everyone’s still arguing about the “perfect” violin sound, well over a century after the last major changes (steel/synthetic strings, longer neck, higher bridge), achieving anything of significance there is not going to be easy.

Obviously, my first test was with the SWAM violin, and it certainly works! It’s obviously not like the real thing, as you can’t control the pressure or which part of the fingertip you use, or anything like that (SWAM doesn’t emulate any of that anyway, AFAIK), but the vibrato curve does seem to respond rather well to the “character” of the motion, and of course, rate and width.

Threshold needs to be very low to have much dynamic range, though, which means there will be some “noise” when moving the hand too quickly over the keyboard, but I can’t really see any way around that, short of having the vibrato in the keys themselves. (Which is why I ordered an Osmose in the first place.)

The first problem I ran into is that you can’t set the vibrato up/down ranges separately in the settings, so what you get is a normalized (symmetric) output, which sounds sharp in this context. I suppose it should be possible to reduce or remove the dead zone for the pitch bend gesture, so that the two can be combined in order to control this.

Interesting, yeah I can see the potential problem of “CC noise” when moving over the keyboard. The best thing would be to have total control of WHEN you want vibrato and bends. I guess the only way of doing that is building it into the keys themselves like ROLI and OSMOSE does.

Vibrato range and “tilt” would be nice to have. Bowed strings favor flat to “on pitch” for vibrato, yes? I remember us discussing this, as fretted strings like guitars can only go sharper for vibrato by nature.

Yeah… I suppose one can just edit out any unintentional wobbles when working in the DAW.

Yes, the traditional vibrato is below the note, in some cases, just short downward “pulses” even (more of a section thing, I believe; never heard a soloist do that), and only goes slightly above for extra intensity in romantic pieces and the like. The symmetric vibrato is more of an Asian thing (very characteristic for the traditional Chinese bowed strings instruments, or rather, how they’re normally played), though some soloists (like Tina Guo) sometimes apply a bit of that to other styles.

Bottom line is, it’s important to be able to control it, as it’s an integral part of the style and expression.

How exact can you control WHEN vibrato and bends are used? I mean when we play a keyboard we go fast with our hands, but I only want to do bends and vibrato on certain notes to add expression. Do you feel that you are in fact in control over this aspect with this ring?

There appears to be some clever filtering which makes the signals less noisy than what one would expect, but response still seems instant, especially on vibrato, so if the threshold is too low, it will react on any reasonably quick hand movements.

The bend seems to have a slight response time in order to keep it from essentially doubling the vibrato, as they’re on the same physical axis, so the only “problem” with that is learning to keep the hand level enough to stay in the (configurable) dead zone in order to avoid unintentional detuning.

Another minor issue is the difference between playing with the finger you have the ring on, and any other finger. It might have been better if the stone was on the hand, rather than a finger, at least as far as vibrato is concerned - but at least, it’s still easier than negotiating the differences between the fingers on cello/viola/violin.

All in all, it will require some training to get perfectly clean performances, but it feels WAY more natural and expressive than the ol’ mod + bend wheels. In particular, note that this is true vibrato (as in, pitch modulation based on your exact hand movement), and not the usual LFO rubbish!

Ah that sounds promising, I may end up getting this, since there is such a long wait to get ROLI back in stock.

Btw, is there a way to map a fader to change the threshold level in real time? So that I can go from “blocking” all expression all the way to actually increasing the intensity of the vibrato and bend range?

It does bring a lot of life and organic feel, especially if the thresholds are set low, in a way that just isn’t going to happen with wheels and the like - much like a breath controller! I was testing with a basic sawtooth just now, and even that can be massaged into interesting sounds.

There doesn’t seem to be any CC learn or anything on the parameters. The base unit does have both MIDI in and out, but I think that’s just for “MIDI thru” when using it in DIN MIDI rigs. I suspect one will need a third party MIDI processor for that.

Btw, I have seen a couple of people using the ring in the left hand, while playing leading melodies with the right hand. Did you try that?

Yes, I tried that briefly, and it might be a better option, as it avoids the “noise” issues. However, it feels less intuitive (more like operating the old wheels with the left hand), and left/right hand coordination comes in play. Either way feels like a bit of a compromise, but I believe either way could become second nature after a few hours of training.

On that note, both violin and cello vibrato are mostly second nature now - but that doesn’t really translate to the ring! Ironically, I found it slightly easier with the right hand, even.