Hey all,
thought I’d ask you your advice.
For a while I’ve pitch shifted over time using the fade option… also I’ve used the Apple plug which isn’t as smooth as I’d like.

I was wondering if any of you fine people know of any other ways to do this, techniques, plugins etc.

Just so you know I’m talking about audio, not midi

which is why it’s more tricky.

I think the best way is to choose a pitch shifter plugin from Logic. As you see you have two knobs on the left side: 1. Semitones and 2. Cents 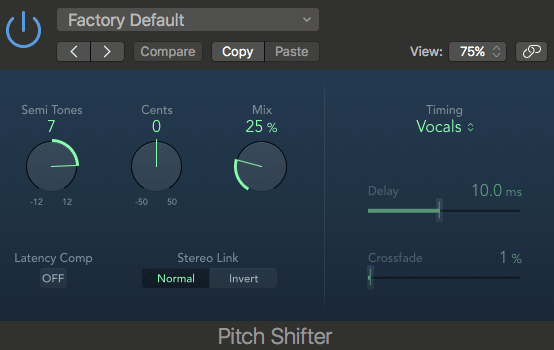 What I would do is to first automate the cents and then make the transition to the semitones after you have reached the right pitch.

I don’t use Logic anymore, and would probably do this with Studio One as well. Another way would be to use a pitch bend on the channel as usual and at the point where you reach the next semitone, you need to either cut audio and pitch the next audio clip to the right pitch or copy the rest of the audio file to a new track that is already one semitone higher.

I think it all sounds a little bit weird, however, I don’t know a concrete plugin that would allow to pitch your sound from 0-12 semitones (oct) in one automation move. The only way would be to use a sampler like Kontakt or EXS24, so you can do that inside where you say how much your pitch bend is pitching up and down.

I hope this gives you at least something to start with.

Hey man, yeah this is the way I’ve been having to do it and it takes so much time. Currently making risers etc so it’s taking forever. I’ve been hoping I’ve been silly and there’s an easy way to do it but I’m starting to doubt it now. Might have to invest in the waves plugin to get the result I want. Need it to pitch bens around 2 octaves.