I don’t remember if I posted it here or not… but I want to share this composition with you… I dedicated it to all people who had to live through lots of hardships during this Covid time, who lost their loved ones… it is kind of a mourning song but it is also about hope and not giving up … thank you for listening… as always I used mostly Spitfire audio sound libraries here… also I never use percussion loops and write percussion myself

That was great. A fantastic composition very skillfully executed. Art is wonderful. Thanks for posting.

The brass are from the Spitfire library? which library did you use?
What did you use for the metallic percussion?

This is lovely Julia, well done! Thank you for sharing!

Hi Julia, again I don’t find anything wrong with the piece itself but I think the mixing could be improved. The tune would benefit from having more warm low end and midtones. Now, the piece ends up coldish and alienating because it is lacking on these elements. This is just my opinion, of course. Are you using reference tracks to compare your work to?

Love the ambient sounds! Just wanted to know if those were your paintings they are beautiful and blend so well with the music.

sorry for the late reply… was really busy… I used Damage by heaviocity 1 for percussion… I also have some percussion in Albion 1,4 and 5. The brass is from Spitfire… actually I have lots of Spitfire libraries… they are really good

thank you! Sorry for the later reply!

thank you Alexis! Yes, those are my art and I am a professional artist and music is kind of a hobby, but I am also working on some projects as a composer but for free

Thank you Geoffrey! Sorry for the late reply… it was a hard month!

Thank you Harri! My sound is not perfect, I know… I am working on it… What tracks would you recommend to listen? also, how to add warmth to the sound? Any ideas?

That’s ok, everyone understands these are unusual times. BTW, I saw the comment about warmth and I can’t wait to see the response. The first thing I try to do is pick warm sounding samples or virtual instruments. If you look at these with a spectral analyzer I think you would see a relatively flat frequency response or maybe a bit of emphasis in the mid lower range. I know that sometimes i get comments about my music being bright and harsh and usually do some eq to reduce the highs and that fixes it. Your fx chain can be a big help here and Acustica makes some great plugins that can help. You can apply this to this mastering process, make an fx channel out of or put in an individual track. I have Total Studio Max and it came with all sorts of plugins with presets that say they add warmth etc but you really have to know to know how to use these in order to get optimal results as the presets are pretty good but in my opinion may not exactly correct for a particular piece. I also find adding a touch of reverb helps. I’ve taken some trumpet or piano that patches that were kind of grating and used some EQ and reverb to fix those. Sample Tank virtual instruments generally have settings for Cutoff and Resonance and playing with those can really elevate a sound. I usually lop a bit off the highs and set the resonance to match the cutoff frequency. On my electric guitar I found a little delay, reverb and a touch of EQ can greatly add warmth. My jazz guitars are just warm by themselves for the most part and if I cannot get enough warmth for a particular song then I starting turning the treble down on the pickup, sometimes to the lowest position. I hope that helps. I would not say that I am expert and anxious to see what others have to say but that is what has worked for me. In this field I find that there is so much to learn I wish I could have a redo of my life and have started way earlier learning audio techniques! LOL. Again very impressed with your artistic talents. Very cool.

Hi Julia, I think reference tracks are up to your personal taste. Take any commercially produced track you like and compare your own tune’s sound to it. Then try to make changes (e.g. using eq) so that your piece gets closer to the track you like. I know it is hard to match the tracks made with huge resources in famous studios by skillful mixing and mastering engineers, but try to get as close as you can. Hans Zimmer is a big name in soundtracks but I don’t know whether his music is to your liking.

I took the liberty to download your track and made two versions of it. The first one is done in Logic Pro X using just Channel EQ (this is a default plug-in which comes with Logic) and Voxengo Tube Amp (this one can be downloaded free from the Voxengo site).

Here are the changes I made using EQ. 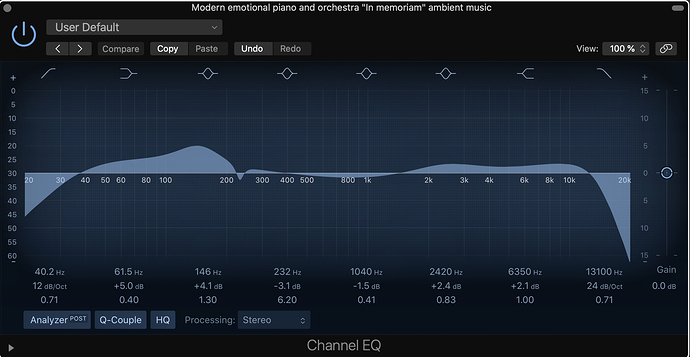 The Voxengo Tube Amp settings are below. I took the Master Warmer preset and adjusted Bias slightly. 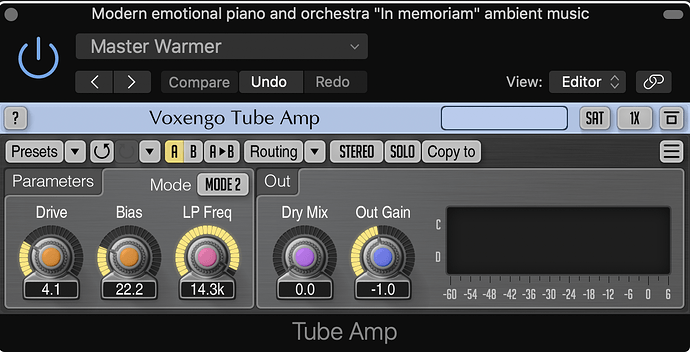 And here’s the mastered version. I just took the Logic version above through my mastering chain without any changes in the settings (it is maybe a bit on the bright side).

So, basically the first version is doable in any DAW using just eq and voxengo plugin. I am not claiming that my versions are perfect in any sense. I did these quickly to show what I meant by warmth and more focus on low end. I think the low end is much more impactful in these versions (listen to the drum hits and the low synth for example). BTW, which DAW are you using?

Your samples (the orchestral ones) sound very much like Nucleus from Audio Imperia but I could be wrong of course. I am using that one and I like it a lot. If you are using this sample library, you may want to adjust the reverb of the instruments and also sometimes try the classic sound vs. the modern sound. One approach is to disable the sample library reverb fully: this way you get the recorded sound with room sound and can rather use a reverb of your own.

Edit: Read your original posting and discovered that you use Spitfire sound libraries which I believe are very good.

thank you Gary! i am using Ableton and i just figured out that multiband compressor helps a lot. also saturator. i will work on these anyway

no, these are all from Spitfire libraries.they come without any reverb or you may adjust it in the sample, which is very convenient. i have a free arturia reveb plugin. what other reverb plugins are good?

Voxengo also has a free reverb plugin called OldSkoolVerb. It is worth trying out. Lately my goto reverb has been Kleverb by Klevgränd. It is a fairly inexpensive plug-in but I think it is bigger than its price. If you wait until Black Friday, you may see it discounted.

Multiband compressor can easily ruin a mix too.

How do you find the mastered version of your tune? It is sonically even further from the original, I suppose.

Oh right, I have used saturation with a clean guitar signal to produce some overtones to fatten up and warmup the sound. I have not had much luck with multiband compression but that’s a stellar idea and will look into that. Thanks for your response.