Hey everyone, I’ve just uploaded another video. I’m going to normalise the frequency of videos after this one to one a week, and if I do any more then that’s just a bonus

I hope you enjoy this interview with award winning Composer Sam Griffiths! It was a lot of fun to do. 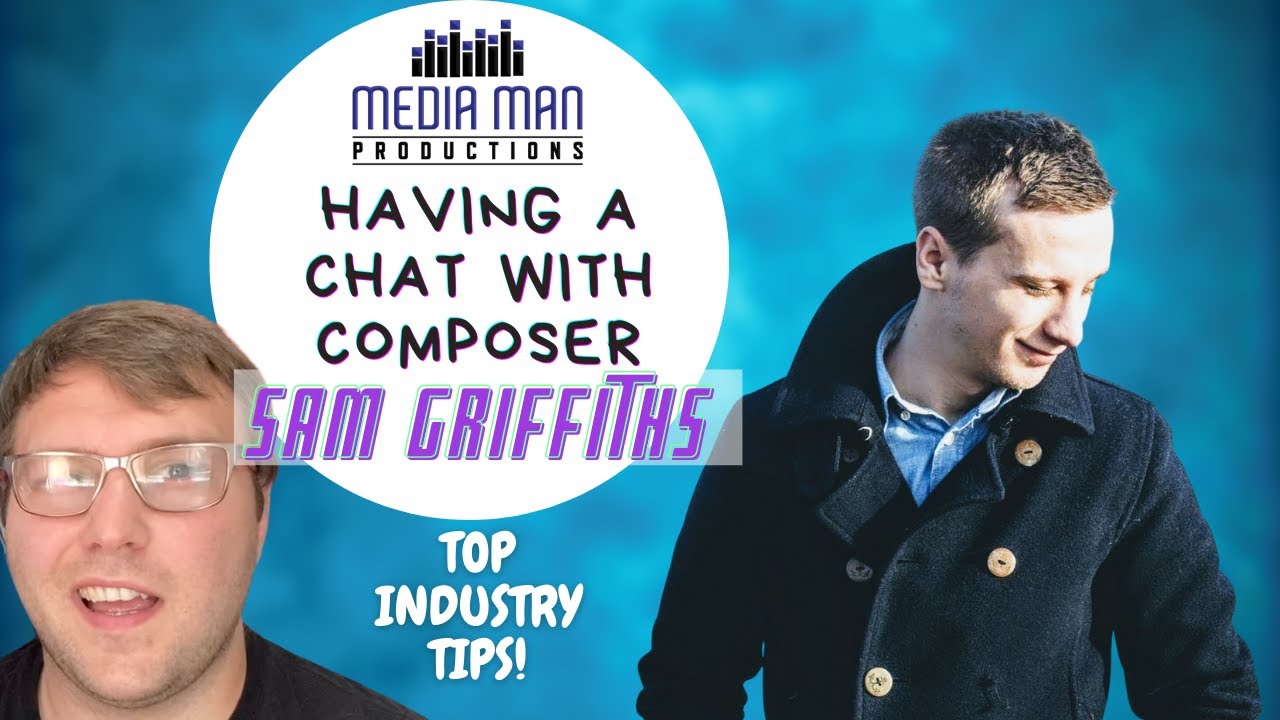 Good interview Geoffers. Took me a bit to get back to this. I was curious what kind of clientele he has for his library music? Is it just his music or does he take submissions from others to license?

Sam does things a little differently to me. In fact I should be doing some of thi things he is doing, however we need to pace ourselves when we include new things, and as sam said. There’s many roads forward in composition.

Sam is very good with confidence, that’s his main tool. He’s quite happy to join a forum and add the best composers and then inbox them for a chat.

He also has a secret weapon, he’s the musical coordinator for Siix audio trailer music. This sounds exciting but it isn’t. This basically means he’s the guy people send trailer tracks to and communicate through for syncs. Because of this he gets a LOT of emails, and because his job is very hands on with clientele he leans into that. So the best composers will often get found on social media by sam and they might collaborate.

I do this to an extent too, but generally it’s not as “cheeky” as how sam does it. I don’t join forums and then add everyone in the hope to get work, that just isn’t me… unlike sam I’m more interested in helping and education of music. So as you herd in the video, I do mixing and mastering MUCH MORE than sam. I get that work by inboxing people who post about wanting those services… I’m good at it because my background is based on it. Obviously my background is in Composition too, I have lots of backgrounds but mixing has been more comfortable for me in the past. This is simply down to a confidence issue I have and nothing more. Sam has this too, he’s a good mixer but he leans into composition because he’s not as confident with his mixes… despite his skills being just as good or even better. We all have this in different areas.

Another portion of his work comes from writing library music. Working for a library, sam used that to get better at his craft. He was getting rejections from Siix for 2 full years before they started including his work in their albums… and he still hasn’t got a sync… however, Sam also does sound design for them and works with the mantra “quantity NOT quality”. I 100% follow this too. Even in composition I velieve you need to get your track finished and move onto another quickly… and when I say finished I mean, conclude your track, mix in an evening, ask for feedback, implement that feedback and then move on. On your next track you make sure you do what you were advised. Then simply repeat this cycle. This boosts productivity and as you write more you learn more, in both composition and mixing alike.

This goes for sound design too. If I’m making sounds for Trailer, EDM, Film, Pop or whatever it is. I make sure I don’t spend any longer thann10 minutes for one sound… and that sound would be a complex sound for me.

I was talking to Mikael about this. If I’m creating a riser or a patch for a sound then usually I’m only spending 1 to 2 minutes on one sonyd. I save it and bounce out the sound. So I’m one hour I have 30 sounds. I might do that for 3 hours and then at the end I pick the best… so what do I do wirh the others… I stick them back in my daw and I mix two together to make a new sound and repeat. At the end I pick the best out of them too and add them. Then I have say 50 good sounds along with the knowledge of creating 90 sounds from scratch. ANC with that repetition I’ve not only learnt how to create those sounds, I’ve created muscle memory and improved on work flow too.

Sam does exactly that and most of his money per month comes from his hits or risers being synced to film… NOT his music. When I said I should be doing what he does, this is what I should be doing as I’m just as good if not better at sound design. He’s been very clever in focussing on what will make money… and plus, sound design can actually be even more fun than composition because it’s quick gratification.

Sams last source of income comes from a website which I’m apart of called “Music Jobs”. Yep it’s as straight forward as that. This is the number one place where music jobs are advertised IN THE WORLD. It’s a subscription to be a part of it per year but it always has payed above and beyond the Sub. I totally recommend it.

That’s a lot to digest! I’ve heard that from countless people, “quantity vs. quality.” I do understand the reasoning behind it, but I find it hard to write write write and write more because I just don’t want to spend time putting something together that no really wants to listen to because it not real good. So I most always try to make it listenable if it’s not perfect.

Another reason for that is I have music in my head and I heard it as the finished product (that is, I hear it as what it sounds like if it were a film soundtrack recording) and as you know, I spend an excessive amount of time trying to mix things the way I hear it in my head, which just doesn’t work

I almost feel more comfortable as an old school composer with just a pencil and a score! Yours and Mikael’s tips and suggestions have really improved my speed and work flow though!

I think a few more good compositions to get my confidence up a bit more and then I want to start working on the business side of things, setting up my own webpage/library etc.

The whole quantity vs quality is the complete opposite to how people LIKE to work. Yes, we want to get better and yes we want to enjoy ourselves but, if we were to put those two things on a scale which would come out on top, this will be different for everyone. But I think we can all agree on the fact that we want people to enjoy what they are listening to, and this simply means putting in the graft in terms of quantity. This will mean that sometimesYou need to abandon a piece and move on knowing that you’ve learnt as much as you can from that track, this is known as the law of diminishing returns.

The best way that I have found to improve on the amount of time that you spend on a track is to set yourself timed challenges, where you create a piece of music and a specific time frame and implement all of the techniques that you know how to use to make a piece of music quickly. Then, make a note of the things that you struggled withAnd use that information to determine what you need to learn next.

You also need to be brutally honest with how many people are actually listening to your music. For example if you are only getting 20 views and you’ve been going a while then that should be an indicator that you need to mix things up. Also, people will appreciate the quantity of music that you bring out more than
The quality to an extent. What I mean by this is there listening without the filter that you have. We often listen critically Tyrone music and ignore when we need to take a step back from it. In the law of diminishing returns you will see a pattern that we can follow. That pattern will show us that at one point The amount of effort you put in to your work won’t yield as much of a return compositionally, it’s at that point you need to slow down on the track and move on. A lot of people then released that music either in a forum, on SoundCloud, on YouTube etc, So that people can enjoy it and also give feedback. Emphasis on feedback, this is important.

It’s great that you’re improving and it will take awhile to get used to doing things that increase your speed even more and I look forward to seeing how that turns out. As you go forward just keep these things in mind as it doesn’t need to be perfect, this is something that I am learning from YouTube and creating videos. The videos aren’t perfect at all I understand what I need to do, I know what to do, but just like a juggler he was learning to juggle I sometimes drop the ball which is okay because we learn as we go

Ohhh, abandoning pieces is what I excel at

Seriously, i have about ten pieces that I’ve started months ago that I left because I din’t like something or just ran out of ideas, but then I go back to them and try to finish them because I’ve learned more. Doing that with one now. I also find it helpful, though it prolongs the writing process, to just stop with a piece for a few days and forget about it, then come back with fresh ears. It helps me rediscover a good direction for the piece or correct mistakes I didn’t hear previously.

This is all great advice. You need to be a professor or something

or be a private tutor.

Definitely a great thing to do. I write 4 pieces at once. Then I alternate between them every hour or less sometimes, that way I don’t run out of inspiration as my pallet is always changing.

having said that, my workflow is very fast so I can afford to do this.

I hear that a lot

thank you. I really enjoy one to one work. I tutor guitar and also work in a college in the day. I’m just not sure anyone would want me to be their mentor. I game at it a lot but never get anyone actually say “hey, I’ll pay you for your expertise” so it’s just never actually happened haha!

Well, that’s how I came across my tutor; he had his email in the description of his YouTube videos noting that if you were interested in private lessons, email him and he’d give the details. We did them over Zoom and he charged A bit less than what I was paying at the conservatory…and I learned more!

That is awesome. Really cool that you found someone who you could learn from!