How do they achieve so much PHATNES

I love writing music but I’ve never been able to afford production courses (they’re thousands, around here!) and there’s lots of things I need help with, so expect a few dumbass NOOB questions… 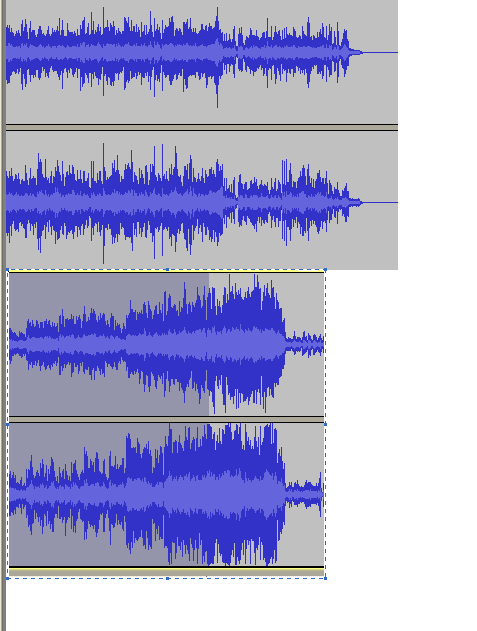 I HOPE this is a picture when I click Create Topic… OK. Now my one’s as LOUD as the bottom one, but the bottom one’s FAR fuller and richer. I know he’s got much posher sounds than mine (who hasn’t!) but I’ve seen this trick done on pieces using the exact same sounds I have. And I don’t know how to do it.

On another forum someone said ‘compression’ but the track’s BIGGER than mine. When you compress something surely it gets SMALLER, logically, no?

If the uploads don’t become pictures, his waveform’s a hedge, mine’s a patch of grass. I wanna do hedges too! And remember mine’s the same LOUDNESS, just not the same FATNESS.

Not quite sure what kind of sound you’re looking for, as there are many ways to get things loud, most of which were developed as weapons in the Loudness War. You might want to look into multiband compression, multiband limiting, and saturation, for starters.

Indeed, straight compression will essentially just turn the volume down in the loudest parts, so while it can make things louder and tighter overall, it’s not going to help with the loudest parts.

Multiband compression does the same thing, but allows you to compress frequency bands separately - so you can control the peaks of thundering bass without the characteristic compressor pumping in the higher frequencies.

Multiband limiting is kind of similar, but only operates when necessary in order to keep the signal below a hard threshold, so in a mastering context, it will typically be set up only affect the parts that would otherwise clip. It’s kind of similar to a single band limiter in results, but multiband limiters may be able to do the job with more transparency and less obvious artifacts.

Saturation is a softer alternative to clipping, and can be used for “warping” low frequencies into overtones, which, in terms of mastering, can make the bass sound more powerful and aggressive in the loud parts, instead of it just being limited to fit. It’s kind of the same effect as what naturally happens in bass drums, timpani and the like, where more powerful strikes don’t just result in more sound, but also more overtones.

There are lots of YouTube vids that can help you with your production.

That’s just it! Wish I could show you the actual pieces, it’s not loudness, it’s richness/fullness of sound. Kinda the difference between the sound of someone shouting and an opera singer recorded at the same level - they’re both the same LOUDNESS but the opera singer’s voice is FULLER/RICHER. Mine’s a sponge cake, theirs is a fruit cake! Ok so they might have more expensive sounds but I’ve heard the same trick done with sounds very similar to the ones I have - the mix-with-similar-sounds is richer and deeper, though not louder, than my skinnier mix.

Basically, I suppose I’m asking 'how do you add richness and fullness to a mix, not necessarily to get it LOUDER, just FULLER in sound?

Still not sure what the exact problem here is. Sounds, composition, orchestration, mix, master… It all contributes to the final result, but what you can/should do depends on the genre. What genres and styles are we talking about here?

In traditional orchestral music (classical in particular) you want to pretty much have your “mix” done already in the orchestration, and only use the mix and master stages for finishing touches, and subtle tricks to “fake” the live orchestra experience within the limitations of recorded audio. The mix is essentially your hall + microphones.

On the contrary, in electronic music, hybrid scores and the like, there is usually substantial EQ on almost everything, as well as saturation, chorus, delay, reverb etc. The mix becomes an integral part of the composition and orchestration, and you’re basically using all the tools in the box to get the desired result, as there’s no need to worry about “realism.”

Christopher, there is actually a section dedicated to posting compositions and get feedback from the community.

After reading this thread I get the sense that you are looking for two things. At least from my own view of ‘fatness’ in music. Which is:

The first one is obvious. Use EQ, levels and layers to get a clear and powerful low end. The second one you get mainly from good harmonization of your music. But also from added harmonics that you get with saturation plugins like analog tape etc.