Hasn’t really got a title! My first ever attempt to put music to video footage…

Competitors were given a video of just over a minute and 15 samples, of which we had to use at least one.
These included string arpeggios, FX glissando, “Huge Drum” hits, sustained low string notes, choir chord, and others.

As the footage was based on the film “Metropolis”, I was going for a dark, tense, Sci-Fi feel.

The two low string sustained notes were A and C - added french horns from Kontakt Factory Library to make chords of A minor and F major 2nd inversion, and put the string samples through Evade (from Soundspot) to create volume-shaped rhythm.
Broke the choir chord sample by simply splitting it in the DAW and pulling the split pieces apart, deliberately not too evenly.
Took the drum hit sample, copied, reversed and stitched it together to make riser-and-hit - about 4 times (I liked it!).
Also used NI Ethereal Earth, 8Dio NEO for risers, impacts, and synth; 8Dio CASE strings for aleatoric weirdness, and 8Dio Low Epic Kit. I think that was everything!

All done in Reaper.

Screenshot, (if anybody wants to see it!): 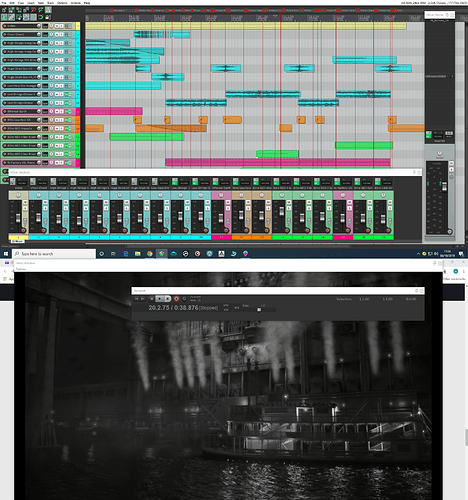 Thanks Phil, very kind of you to say so!
(I see you’re a fellow trombone player!)

Sounds great. What DAW is that?

Hi Everett, thank you!
That’s Reaper, by Cockos Inc.
Their website: https://www.reaper.fm/
I notice there’s very little mention of it here (if any). As I’d done very little recording of any kind in the past (ok, none), I was tempted by the 60-day fully-working free trial, and very low cost, compared to others.
The 60 days were enough to make me not bother looking for any other…!

The machine woman is probably the Maria from the expressionism classic Metropolis by Fritz Lang. I think that the music fits the film sequence. The music sounds dark and haunting. At the beginning of the film, the city draws with a zeppelin and the huge facades of skyscrapers - bare, smooth, cold, monochrome and steel. Then it goes inside a building. The main character is a machine-woman, who only sits quietly, suddenly shines from the inside and then rises. However, the music remains caught in the gloomy mood. Here perhaps another approach would be useful, I think. Silence - Secretive - Abstract - Science fiction - alive, but soulless.
But I do not want to be misunderstood, I find the music to this film sequence very well and I’ve looked at it several times to form an opinion.