In case you missed it, Cubase 11 was just released: 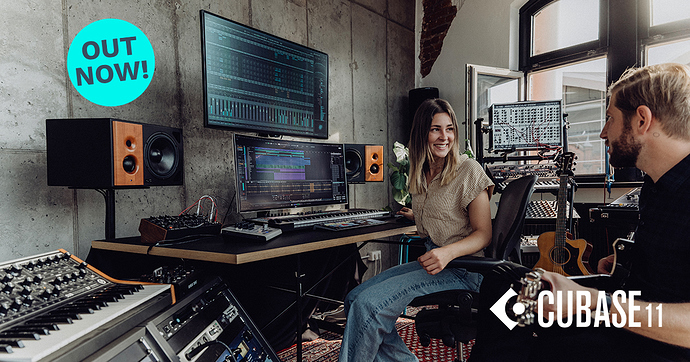 Yet again, they present a bunch of features that have been on my wishlist, a few features I didn’t even know I wanted, and some generally nice stuff. Also, a few new/updated plugins that might come in handy, especially for those who don’t already have their favorite tools from FabFilter, iZotope etc.

Personally, I’m tempted to grab it for the full update price just to FINALLY get proper curve editing for MIDI CCs in the Key Editor. I’ve been using automation tracks routed to MIDI CCs as a workaround.

Wow, in 2020 they finally made a better MIDI paint tool?

always hated that in Logic back in the days, it was one of the very important issues why I have switched to S1. Very easy to paint the lines you want.

However, I will immediately switch to any DAW again that will be first to get rid of any CPU resources when using deactivated tracks. I don’t understand why this feature exists actually. I’ve read in some forums about it, and almost all people said it’s impossible to use 300+ Kontakt instances in one session, even when deactivated as it’s still using a lot of CPU. In 2020 it’s issue number One

What do you think @olofson?

In getting it right away.

I use to wait to upgrade until their forum has calmed down a bit.
https://www.steinberg.net/forums/viewforum.php?f=306

Well, it’s been possible to paint, draw lines, scale, “warp” etc for a long time, but it was all discrete points until now - no structured curves with control points or anything. Looooong overdue, IMHO, but at least, it’s been available for automation data since a few versions back.

As for deactivated tracks, a host can’t just stop running plugin callbacks whenever it feels like it, so a “deactivate” feature isn’t as trivial as it may seem. The plugins need to be properly stopped and unloaded, as if the tracks had been deleted from the project, and everything needs to be restored from the project file when enabling these tracks. That, incidentally, is how the Cubase “Disable Track” feature works, at least since a few major releases back. (Haven’t used pre 7, except way back in the 90’s.)

If that’s not what other DAWs do, I can see why there could be issues - and I’d be wondering what the purpose of the feature is in that case. An extra cumbersome mute button…?

Anyway, quick experiment with Cubase Pro 10.5 on i9 (14 core, all cores locked at 4 GHz), and 128 Kontakt 6 instances, each with Finckenstein Strings (High) Multi from Ark 1, suggests that it’s still working as I expect it to.

If this is not how it turns out in other DAWs, I’d say they have some bug fixing to do.

Yep, there’s always a risk factor there, so maybe not update in the middle of a project…

That said, I’ve only actually seen one “major” issue after an early update, that could be avoided with a trivial configuration change. But, this time, it seems like they’re having server overload problems. I noticed the main web server is also really slow sometimes, so right now might not be the best time to upgrade.

UPDATE: People are still unable to upgrade their licenses to Cubase 11, and the prior version is typically rendered unusable as well, as the system gets stuck in the middle of the transfer transaction. (Terrible design! The operation should time out and unroll in this situation.)

Errors trying to activate a license

No news after that, AFAICT, but the flow of complaints in the forum remains steady. This isn’t the first time either, apparently; I’ve just been lucky enough to not run into it. Not cool, Steinberg.

Interesting facts! Thank you for the comparison. S1 is 0% when opening. After loading like 30 Kontakts it’s about 9% when playing back stuff it’s about 20%. Which is fine. But when going for 300+ disabled it’s more than 20% load, which is really strange.
Overall I have 4.2 GHz i7 and after 40% S1 starts to freeze more and more.so there is no chance going for 80-90% workload.

My only issue is that why having „disabled“ tracks function if you can’t use it to run huge sessions properly?

I curious about how Apple and other applications will manage their new chips.

Well, I’m not sure what they’re doing, or why… My guess is they’re not actually unloading the plugins in deactivated tracks, but rather just suspending them somehow, but even then, I don’t how they can cause engine CPU load in that state. Some plugins (samplers in particular) have background threads that might still be running, but I’m not sure that would explain it, as those threads don’t run in the context of the host’s audio engine.

BTW, in my “empty project” case, there are still three Reference 4 instances and two analyzers running in the Control Room (not part of projects), and even disabling those, idle load is still some 1-2%, as Cubase seems to count all overhead of the engine itself as load as well.

…and he reviewed Cubase 11 as well: The new sampler looks like a lot of fun, with warp, slice, filter, LFOs, and whatnot - that is, actually useful, unlike the first incarnation, which was basically just a small step above raw audio editing.

Also, the new/updated plugins seem pretty capable. The dynamic EQ even has attack/decay controls, which are still missing in Pro-Q 3!

In short, you could pull off some pretty advanced stuff using nothing but integrated features and included plugins at this point… which sounds like an idea for one of those two-hour-track challenges or something.

I’m looking forward to the new stem exporting options, that’s going to save me all sorts of time. The band based width plugin might also help me get rid of Waves Vitamin.

I do wish they’d added the dynamic EQ options to the channel EQ though instead of the separate plugin.

Yeah, I think there are a bunch of nice workflow enhancers in there, and indeed; those plugins are starting to look like viable alternatives to the third party “boutique” plugins.

That was my first thought, actually; I would have wanted dynamic bands in the strip, because I often pull up Pro-Q 3 for that specific feature. I mean, Pro-Q is great and all, especially for difficult problems, but nothing beats the strip when it comes to doing basic stuff across any significant number of tracks. (Probably even more true with the CC121 controller - which is high on my wish list.)

Definitely! I’m using the dynamic eq in neutron at the moment but I find them a bit resource hungry once used across multiple tracks. I’d love to do get more use from the stock Cubase plugins, especially on simple tweak type stuff.

I’d recommend the CC121 if you’re thinking about it, I’ve had mine for a fair few years now and its been a great workflow helper without taking up lots of desk space.

Guess it depends on one’s workflow, but for me, this whole video is basically a training exercise in coming up with variations of the phrase “Yep, I want that feature!”

It went smooth for me to upgrade now this morning!

Not a big install file either, thanks for that Steinberg.

Installed and testing. Went smooth, and no issues with anything so far. Not seeing any issues with the config migration either; all settings, audio/MIDI ports, plugins etc seem to have been transferred, and my most recent project (SWAM, Infinite, Kontakt, Precedence, Breeze, Spaces II etc) loads and works without issues.

Oh, and the pianoroll Y axis is actually evenly spaced 12-tone by default now, instead of the weird misinterpretation of the piano keyboard it used to be. FINALLY!

Oh, and another video: 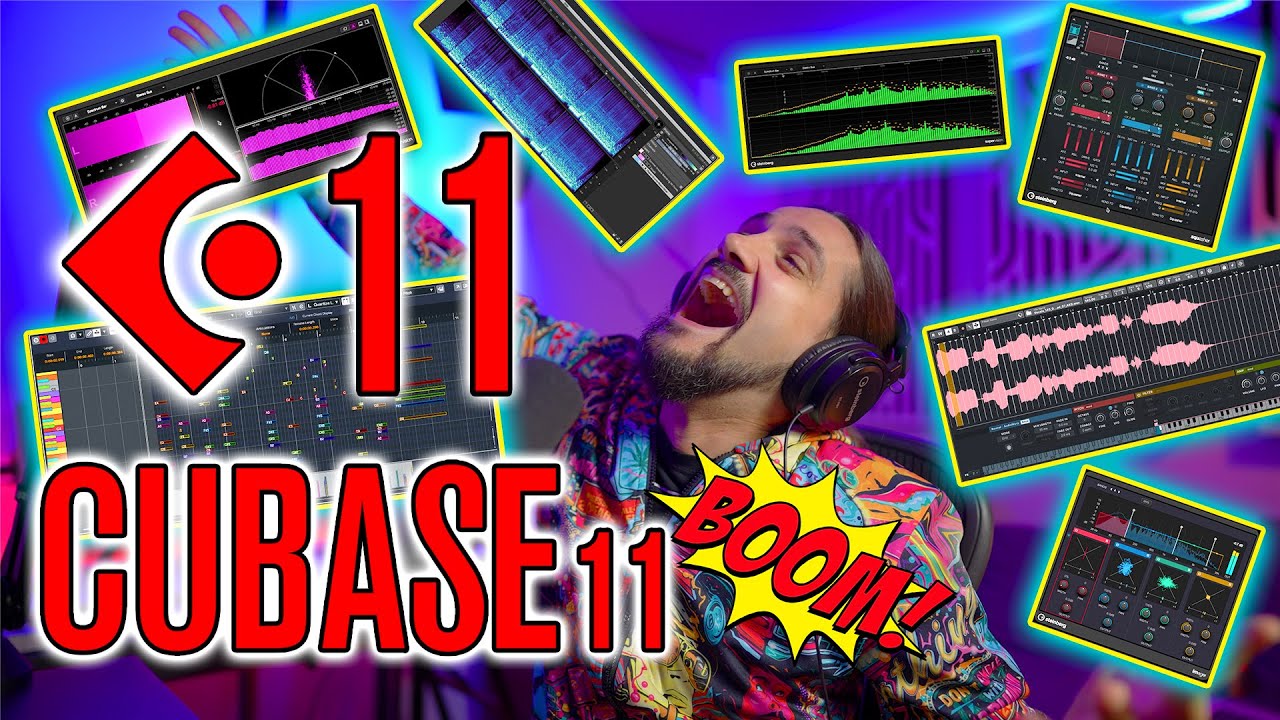 Looks like the SuperVision plugin could pretty much replace all metering plugins I’ve been using - all in one handy UI. If that’s anywhere near as capable as it seems, that alone is worth the upgrade cost.

Yeah, the metering seems very nice. Not much I miss in a DAW now, but there probably will be in the future, ha ha
One thing for Cubase 12 would be different consoles.

In Cubase 10 I had to turn off internet or loading took forever. In 11 that’s not a problem.

I have a question for you Cubase guys @olofson and @StephanLindsjo:
In 11 when I have the cc64 sustain controller lane on the bottom of the screen under the key editor I have to scroll up to see the upper 127 “dots” (sustain on), and scroll down to see the lower 0 “dots”(sustain off) shouldn’t I be able to maximize that little window? Maybe I’m missing something.

) What I do know, however, is that various plugins, and potentially Cubase itself, will try to “phone home” if a connection is detected. Some poorly written plugins will block host initialization while doing stuff like that, checking their DRM and whatnot, which is of course not great if that involves unresponsive servers or slow dongles.

As for the sustain CC, I can’t see that problem in either of the key editors… The lanes seem to be locked at full scale with no scrolling regardless of height. If I size down the whole window/panel, the lanes are just (temporarily) scaled down as needed, and they’re still always shown in full, at the expense of the piano roll. Screenshot?