Wonder if you have any favorite key changes?
And how the transition to the new key look like?
Or where to find them?
I’m sure there must be a lot of nice scores by John Williams and other great composer’s.

My favorites hmm…I would say I personally prefer borrowing from other modes vs completely switching keys. Unless we are talking about key changes that are simply transposing the key?

Usually when switching keys you want to make it as smooth as possible. And the smoothest way is to use a “pivot chord”, which is a chord that is present in both keys. Another common technique is to use a dominant 7th chord on the V based on the new tonic you want to go to. Because a V7 chord is one of the strongest leading chords to the tonic. Or you can even use a II - V - I, for a classic turn.

Mediant modulation is always good. You essentially use your tonic to the III/iii or VI/vi and then change the chord quality to the corresponding parallel chord. Example: Cmaj (I) -> Am (vi) -> Amaj or Cmaj (I) -> Em (iii) -> Emaj.

By classical do you mean it was used in classical music? I never tried a modulation like that, and I use diminished chords a lot for adding tension.

Thanks for your answers!
I’ll experiment a little. I’m a bit of a newbie when it comes to modulate and change key.
And the music I do is some kind of soft romantic relaxed piano music.

well, sometimes I guess it can be a nice transposing where I keep the main theme but develop it in a new direction but with the same mood.

Cmaj -> cdim -> C#/Db Maj sounds more beautiful to me than going to Bm.

Key changing is definitely something I should be doing more regularly in my music writing. More recently, I’ve been using the triad relationship between C minor, Ab minor and Eb minor (and then Eb minor, B minor and Gb minor etc) ascending through the triads to a key endpoint. You’ll notice that the minor third of C minor is common to both Ab minor and Eb minor. I haven’t implemented this in composition yet, but intend to do so.
For beautifully crafted and seamless key changes, I suggest having a listen to Richard Strauss. Pieces like Vier Letzte Lieder (Four Last Songs) and his Alpine Symphony show how key changes are natural and key (pun intended) to his music’s dynamism and melodic beauty. Truly a master.
Regards, Adrian.

Yeah, it was used more in classical music as it follows simple diatonic theory which was the norm in 17th/18th century. Since a diminished chord is your VII chord in major key, you move it up a half step to the major, which gives that chord a tonic feel. Likewise in minor keys, your II chord is diminished, so if you move it down to the minor chord a step below, it’s the tonic.

But since you can also substitute the VI minor chord as a tonic (Cmaj/Am, same key signature) you can modulate the chord below as a major, which makes the modulation a bit more dramatic.

I love that you added the part of “make it more dramatic”. When I teach I always try to emphasise that you dont’ HAVE TO make voice leading smooth, or any changes like modulations etc. It all depends on context. If you want a dramatic effect, doing something that creates contrast, is the way to go!

Absolutely! Don’t follow the theory just to follow the theory! Do it because it makes sense and makes the music sound smoother. I learned harmony from reading Tchaikovsky’s old book, but since that’s rooted in 19th century harmony and modern harmony doesn’t play by the rules often, I find myself writing stuff that sounds real dated sometimes. I highly recommend J.Jay Berthume’s new eBook “21st Century Part-Writing.” He’s super knowledgeable on just about most theory topics!

maybe this could be helpful: 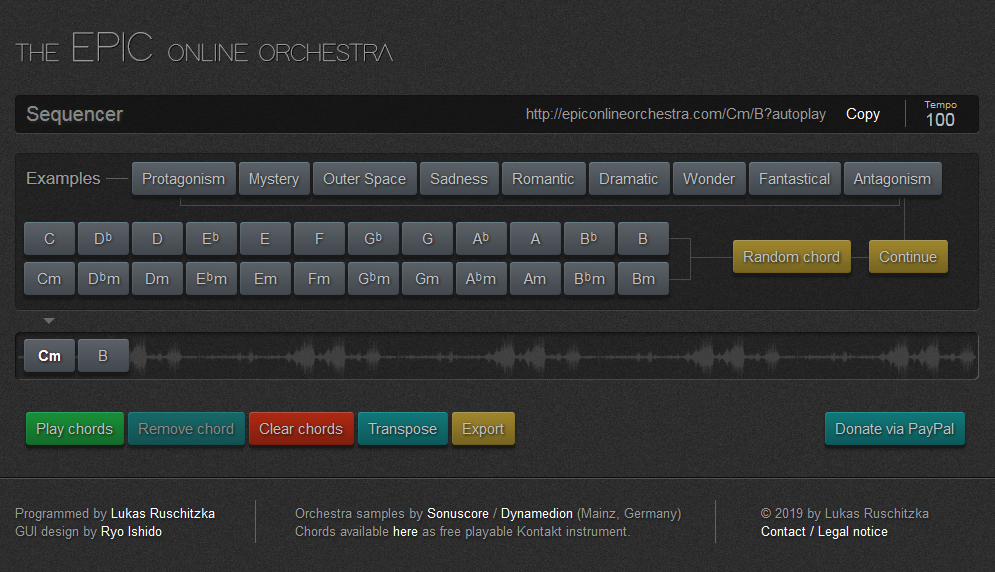 Have your favorite chords played by an epic online orchestra! Browse through the presets, try out different chords and export your results as MIDI, WAV or MP3 files.

There you have the option to continue your chords in specific “themes” like Romatic, Fantastic…

So you inherit the key from the chords that you choose there.

This topic is also on my list for one my next “dramatic scenery” tracks.

Seems awesome, I’ll try that too.

I personally don’t have a favourite. Because I’ve learnt over the years that every possible chord progression can be just as beautiful of appropriate to whatever context you are applying it to. You just need to consider the factors that attribute to it succeeding.

this is fairly advanced but these concepts can help the structure and flow of your phrases.

All chords can be phrased however you like, spread out or close together. As long as your not just relying on a basic triad spread where all notes are next to eachother the chords will already sound better.

Then we need to think about timbre of the note. Simply put, each instrument has a select number of keys that it sounds best playing. This is to do with the harmonic series as you play a note. When you play a note multiple frequencies are also available slightly quieter than the fundamental frequency. This is what makes certain notes or chords sound great of certain instruments.

When we have the general shape and instruments picked we can then think about counterpoint. At its fundamental level, Counterpoint determines how the phrases interact with eachother. This step solidifies each instrument part. After this step you’ll have individual parts that are well spread and phrases so that the movement is complimentary to one another. In essence you just need to be aware of avoiding parallel movement… mainly 4ths and 5ths. Occasionally you can do this (especially in eastern music) but not all the time. This is especially important in corals.

The final step is voice leading. Simply put, this is making sure there aren’t too many leaps between the notes on each individual instrument. If there is you can divide the note up and step up or down scalicly to the next note, or just change the note so it’s closer. As a general rule I try not to do any leaps higher than a 4th, unless I’m jumping octaves.

This is just an insight to how my theory brain works. But this is why I don’t generally think in terms of “the best chord progressions“

That’s a good way of modulating. (The Dim way you shown. If you raised the tonic a semitone then essentially you are using tritone substitution to change key, which is very nearly what you are describing. Very cool!

Ah yeah, tritone substitutions, I didn’t think of that! Indeed close to what I was describing. I was just thinking of diminished chords as a pivot point essentially.

Yeah you just flattened 2 notes rather than sharpening the tonic. Still a really cool way to do it. You could even augment the 5th and flatten the third. This would give you another tritone sub.

Lots of good ideas here!! Thanks for suggesting the topic!

Mikael mentioned using modal interchange chords in a progression. I do that a lot. Instead of cadencing from V7 - Imaj9 (for example) I’ll inject a bVImaj7 - bII9 to delay the resolution. (In C: G7 - Abmaj7 - Db9 - Cmaj9). If I’m looking to end a piece on the IVmaj7 chord I may reverse the middle two chords and resolve it G7 - Dbmaj9 - Gb13 - Fmaj9#11. (I like leaving a slight, memorable buzz in the room!)

Matt mentioned mediant harmony. I’ve become a big fan of mediant harmony and love the openness I get by modulating from I major to VI major (i.e. C to Ab). A common way to smoothly tie that together is a common soprano voice (carry the C in the melody from the root in C to the third in Ab).

I tend to use common parallel chord structures to move from one key to another, particularly using parallel bVII/I (e.g. Bb/C). The ambiguity of the structure leaves all sorts of resolution options open. Patrick Williams and Frank Mantooth are two writers who’ve used that a lot.

Frank taught me “Forget V-I. It’s all about pain and release.” That opens up a world of options, too.

Then there’s Jacob Collier. All bets are off. Go wherever you want, right? He lost me with microtonality transpositions. A genius, absolutely! It’s going to take me a while to digest half of what he does naturally.

Lovely to put in and use that Abmaj7 for a start of a change. I recognise that cadense from some famous song which I don’t remember.

You are most welcome, Stephan!

Glad you like that sound. Like I said I use it a lot. The Abmaj7 is modal interchange. The Db9 is a tritone substitution for the G7 (both chords enharmonically sharing the same tritone B and F). It’s appeared quite often in various songs (I wish I had the copyright but, alas, many others beat me to it!

). The root motion is a secondary II-V cadence so it works on many levels!

As Mike would say – “Here’s a Bonus Tip”

When the melody ends on the 9th of the tonic major 7th and you want a little more “pain and release” try cadencing to a VII7(#9)/I before resolving the inner voices to the Imaj9.

Make sure to keep the major 9th in the melody. It serves as the #9 of the E7. The lower voices of the E7 (G#, B, D) form a diminished triad which I normally resolve upward by step the the lower notes of the Fmaj9 (A, C, E). The E in the E7(#9) sustains to the E in the Fmaj9. Yes, you go from a six note chord to a five note chord but the richness and added twist of the harmonic knife is worth it!

Just saw this. The most magical sounding key changes often involve modulations of a third.

So many possibilities exist. You can even become polytonal momentarily and then resolve into one of two superimposed tonalities.

Sometimes you want to change to the most unrelated key imaginable—which is of course related in that it is so unrelated.

The key point, almost every time, is melody and voice leading. If the melody leads naturally to the new key, and if the voicing of the antecedent chord can lead with only slight changes (half steps) to the next chord, the transition will feel right.

This isn’t a hard-and-fast rule; the key change must be auditioned and it has to feel right to you.

I use key changes constantly. They are critical. But of course people who know my work know who my patron saint is.