Wondering if anyone has, or is thinking of purchasing Audio Imperia’s new Areia Cinematic String library? They are offering a customer loyalty discount until August 1, which I can take advantage of, but I’m a bit hesitant. I really don’t need MORE string libraries, but, you know how it is

I already own their Jaeger and Nucleus libraries, which serve their purpose–Jaeger for big trailer music sounds and Nucleus for a smaller full orchestra/layering sound.

This library is only strings, and seems to have a cinematic, slightly darker sound like CSS, but it contains far more articulations than CSS. Any critiques from someone that has it already or anyone thinking it might be a good library?

UPDATE:
So I took the plunge and purchased the Areia library and have to say, I am most impressed. This library is indeed similar in sound to Cinematic Studio Strings, with a sightly darker and more cinematic feel compared to their other libraries, Jaeger and Nucleus. Though as an owner of the other two as well, Areia is much more similar to Nucleus than not; I suspect that Audio Imperia took the strings from Nucleus, polished them up and gave them some extra articulations. Regardless, I have CSS and thought they were one of the best string libraries out there, but Areia may have changed my mind.

Areia features 16 violins, 10 violas, 6 celli and 4 double basses. These are available in separate sections, two pre-orchestrated sections of violins + violas 8va and celli + basses 8va or as a full ensemble. The separate violin section has an option to separate them into 1st and 2nd violins which is nice, as most string libraries only have the full violin section, which of course is a bit unrealistic in terms of composition as the 2nds don’t always just double the 1st.

The articulation sets are mostly across the board for each section and have a true legato, sustain, tremolo AND a measured tremolo (violin and celli only), staccato, spiccato fast, spiccato slow, marcato short, marcato long, con sordio sustain, pizzicato, Bartok pizzicato, col legno, portato, trill half tone, trill whole tone, harmonics and a quite nice sustained sul tasto. Most of these articulations can be adjusted for no vibrato to full vibrato and the dynamic range for most are from pp to fff. There is an option to set the range all the way down to niente, if preferred, which I though was a nice touch.

Sonically, the sound is near flawless; there doesn’t seem to be much in the way of recording artifacts like there was with Jaeger. Just a very clean crisp recording. There are two pre-set mic mixes, Modern and Classic, with the Classic having a more distant and subdued sound for a real cinematic feel, and the Modern giving it more volume and punch. Beyond that, there are four mic positions that can be set to taste, spot, decca, wide and far.

Without making this post too long, my final thoughts are that Audio Imperia have done a fantastic job of continually improving upon their previous efforts and have achieved a top class product with Areia. The sound quality is excellent and the wide dynamic range and articulation set create the opportunity for an emotional range anywhere from small and intimate to full aggressive power. This will probably be my go to string library from now on.

Finally, I created a short piece, all strings, featuring this library. I only used the sustain articulation (just what my creativity thought at the moment) and with the modern mic mix and built in reverb. The only adjustment I made was to the note start time at 170ms. Not the best composition-as I kind of rushed it, as ended up with too many counterpoint lines😅
https://soundcloud.com/parnassus-musique/of-love-and-sorrow

Hey Matt,
there are some reviews out on Youtube, Daniel James, Alex Pfeffer and Dirk Ehlert showed them up in several streams. I think the main topic was, as you mentioned already, the bit darker sound, and the attack. So just check out their videos, 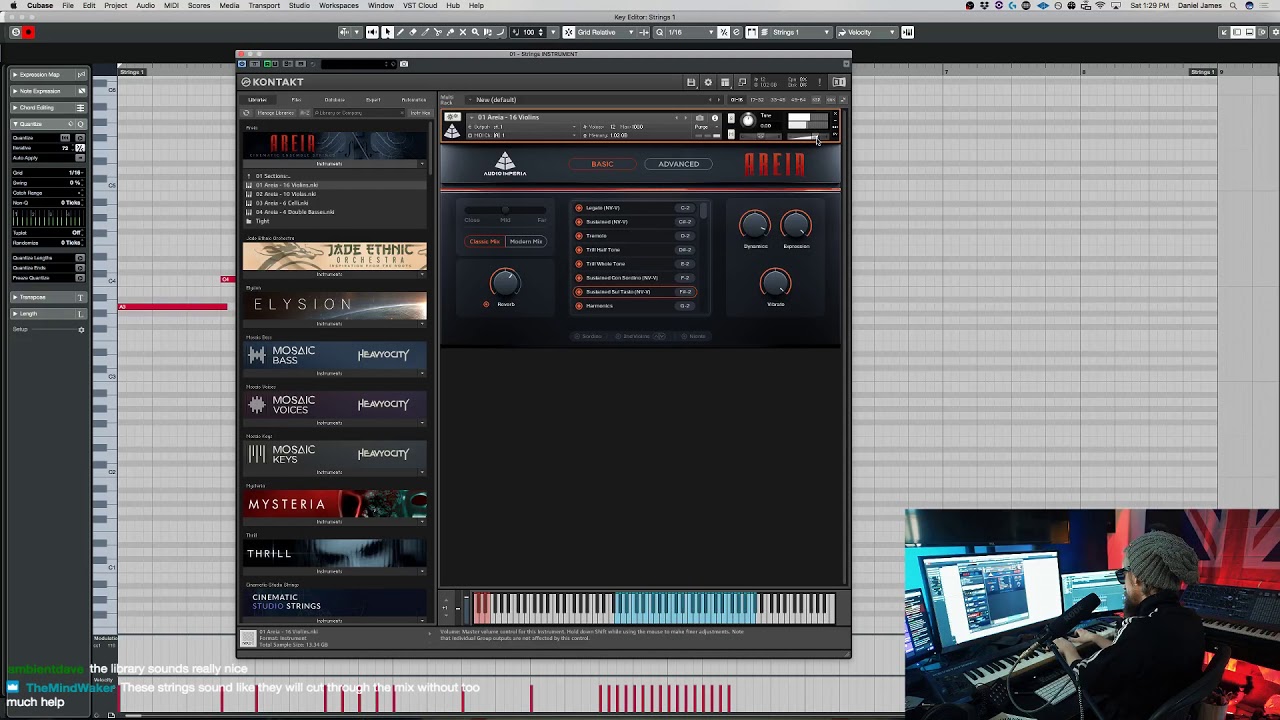 Cool, thanks Michael. Will look at them.